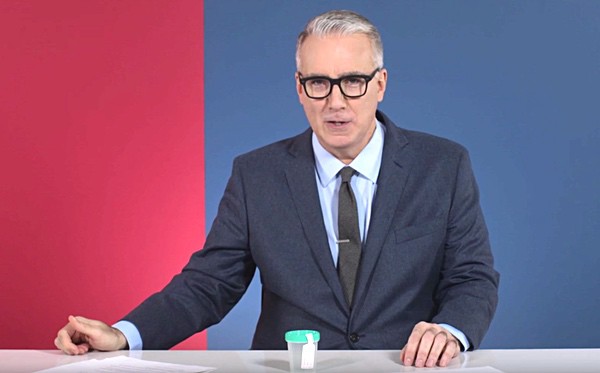 First, if you would like to stay completely sober, play the “Donald Trump complete sentence drinking game” and you’ll discover what a mountebank he really is.

Second, follow some advice from Trump’s ghostwriter on The Art of the Deal, Tony Schwartz:

“Something I saw early on w/ Trump: most negative things he says about others are actually describing him. Read his tweets with that in mind”

Something I saw early on w/ Trump: most negative things he says about others are actually describing him. Read his tweets with that in mind

As Olbermann, notes, Schwartz is talking about projection. “You say it about somebody else, you’re actually confessing it.”

And Olbermann pulls a few choice tweets to examine this thesis, like the one in which Trump claimed, “Nobody has more respect for women than Donald Trump.”

Replies Olbermann: “Like Nancy O’Dell. You did say you tried to respect her, Donald Trump. Respected on her like a bitch.”

The media. The media pile on is more about his efforts to bully the media than anyone piling on.

Responds Olbermann: “But Trump, since nearly all the polling places are not even set up yet! It’s three weeks before the election. How could you know that the way to rig the election was by intimidation or hacking, unless…ohhhh. But you couldn’t be doing all that by yourself. Could you?

Olbermann: “So all the Putin stories about you are true, Trump?”

Donald Trump said he and Hillary Clinton should take a drug test before the next debate 👀 pic.twitter.com/4RXL2KlKUc

And Olbermann has a urine sample cup ready for Trump.