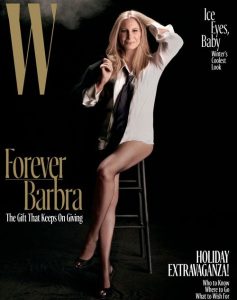 PANTLESS BABS FOREVER! Mrs. James Brolin shows off her gams on the cover of W, reveals whether she sings in the shower. 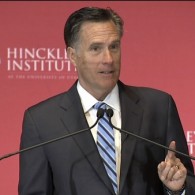 MITTENS. Mitt Romney to meet with Trump this weekend, may be appointed Secretary of State: “Romney doesn’t have a great deal of relevant experience, just like South Carolina’s Nikki Haley, whose name is also attached to the Secretary of State role. But he does have a bit more – he was a governor, ran management consulting and private equity corporations, managed the Salt Lake City Olympics organizing committee, and was a missionary abroad. Despite many of his less than acceptable positions, especially on social issues, Romney is seen by many as a statesman.”

TELEVISION. Speculation has already begun about the next season of American Horror Story.

TICK TOCK. Stephen Hawking says humans have 1,000 years to find a new planet: “I don’t think we will survive another 1,000 years without escaping our fragile planet. I therefore want to encourage public interest in space, and I have been getting my training in early.”

GOD SAVE THE QUEEN. In case The Crown didn’t satiate your need for royal costume dramas, get ready for a look at another famous British queen–Victoria.

Discover the epic story of #VictoriaPBS, one of England’s youngest queens. A new era begins January 15th at 9/8c on MASTERPIECE on @PBS​. pic.twitter.com/ww46MXc5hb

TERRORISM. New York bomber pleads not guilty: “Prosecutors have accused the Afghan-born U.S. citizen of setting off an explosion in Manhattan’s Chelsea neighborhood on Sept. 17. It did not kill anyone but hurt 30 people. The attack came hours after authorities say another pipe bomb planted by Rahimi went off along the course of a charity road race in New Jersey, although that detonation did not injure anyone.”

YEESH! What a horrible way to go.

Previous Post: « CNN Compares Reactions of Optimistic Gay Trump Voter with Scared Transgender Clinton Supporter – WATCH
Next Post: Kanye West: I Didn’t Vote, But if I Did, I Would Have Voted for Trump – WATCH »