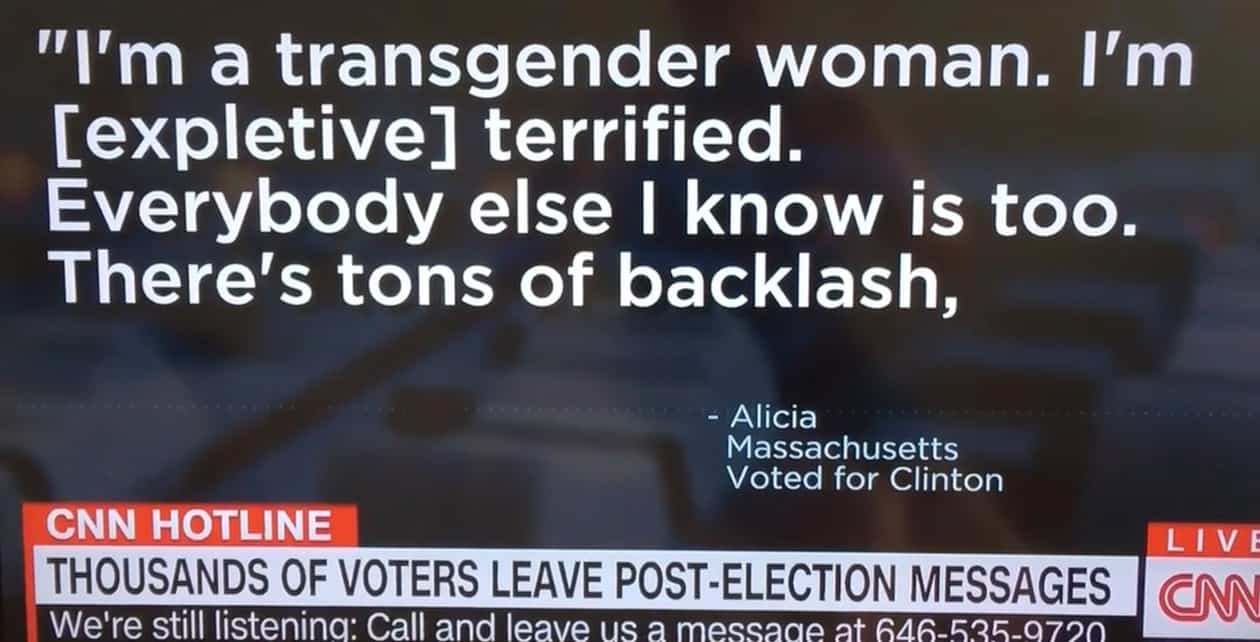 CNN aired a segment on Thursday that highlighted the division between gay voters who supported Donald Trump and other members of the LGBT community who fear what his presidency will mean for their safety and their civil rights.

In the wake of Trump’s election, the news network set up a voicemail hotline where people could call and leave their responses to the outcome of the presidential race. CNN compared the reaction of a gay Tennesseean voter who proudly supports Trump and a transgender woman from Massachusetts who says Trump’s election has left her scared to leave the house and constantly looking over her shoulder.

“I couldn’t be happier for the results of the election. I’m also a gay male. And it was great turnout. I think everyone is freaking out about Trump taking away rights, and he’s obviously not. He just said it on ’60 Minutes’ last night that he’s not going to touch gay marriage. So I think everyone should probably calm down a little bit and take a step back.”

Thomas did not make any mention of Trump’s list of virulently anti-LGBT potential SCOTUS appointees who could overturn marriage equality and make life worse for LGBT people innumerable ways.

Alicia from Massachusetts, however, said for her part,

“I’m a transgender woman. I’m [expletive] terrified. Everybody else I know it too. There’s tons of backlash, tons of violent crimes happening against people like us. And we’re so visible. Most of the girls I know have been staying inside for days now trying to avoid going out and about. I went out today I couldn’t stop loving over my shoulder I was so afraid.”

Despite the apparent division among some LGBT voters over Trump, the president-elect actually garnered a historically low amount of support from the LGBT community–only 14% of the LGBT vote.

The Washington Blade reports on how that stacks up to previous election years:

In 2012, GOP presidential nominee Mitt Romney received 22 percent of the LGBT vote compared to 76 percent received by President Barack Obama in his re-election bid, according to the exit poll conducted that year.