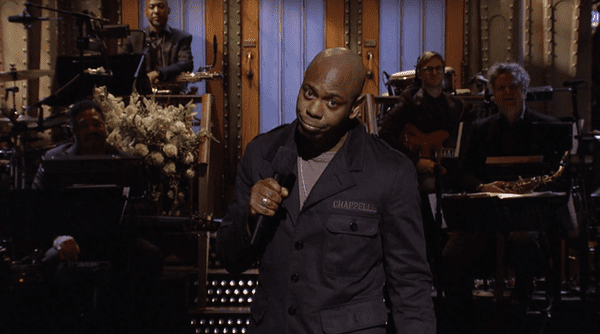 Dave Chappelle returned to TV on Saturday night as host of SNL, and in lieu of a traditional opening monologue did a longer stand-up monologue on the election of Donald Trump.

Chappelle said that though he was pulling for Hillary, something didn’t sit right with him in the final days of the campaign. “I know the whites,” he joked, “You guys aren’t as full of surprises as you used to be.”

Said Chappelle of Trump, “We’ve elected an internet troll as our president.”

Chappelle added that reaction to Trump’s win is something he’s never seen before. “I watched a white riot in Portland, Oregon on television the other night,” he quipped.

Chappelle also talked about the epidemic of mass shootings in America. Referring to the Pulse massacre, Chappelle said that while authorities and media said at first that it was perpetrated by ISIS, “it turned out that wasn’t exactly what happened.” He added, “And if that is what happened, then ISIS is scarier then I thought because they have very deep cover operatives.”

Impersonating an undercover ISIS agent trying to infiltrate the LGBT community, Chappelle joked, “Look guys I’m going down deep for this one. I might have to get a Grindr account and jerk a few guys off to throw them off the trail.”

Chappelle also discussed the Black Lives Matter movement, President Obama’s legacy, and a historic visit he made recently to The White House for a reception hosted by BET.

At that event, whose guests were entirely black save for Bradley Cooper, Chappelle said he was reminded how few times black people had been invited to the White House throughout history: