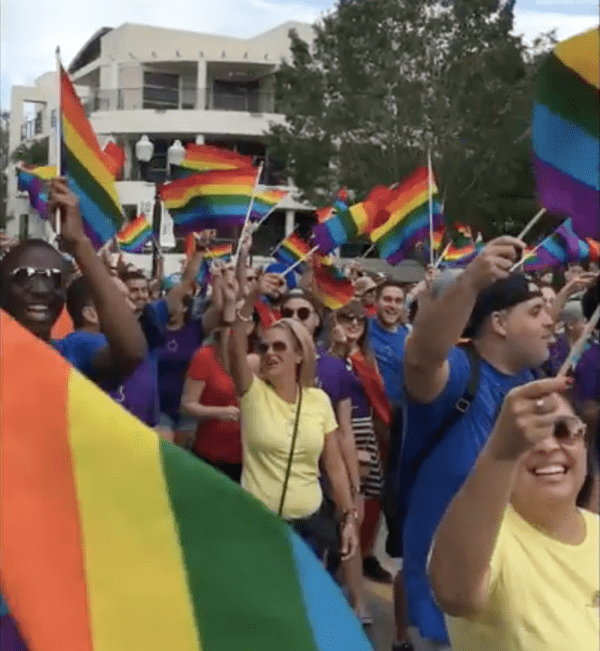 Around 150,000 people showed up for Orlando Pride on Saturday on the five month anniversary of the Pulse massacre that cost 49 souls their lives.

The event was roundly as deeply emotional for those in attendance. The parade was delayed five weeks because of the threat of Hurricane Matthew.

Pulse employees and relatives of the slain served as parade marshals. And the procession also honored police officers, firefighters, paramedics and hospital workers who responded to the shooting.

For many, the event was another step in the healing process for a community that’s still reeling from the terror attack.

“I’m sure, for me, there will be some tears, because it was here,” Melissa Cortez said.

It was Nancy Torres’ first time attending the event. Torres sold Pulse T-shirts at the festival to help support her son, who worked at the club.

“They’re good kids,” she said. “They just have fun. They love each other. It was always a nice place to go.”

Torres’ son and his former co-workers were among those honored on one of the parade’s first floats.

“The Pulse attack was very emotional,” said Leo, who didn’t provide his last name. “It’s kind of like a closure for it, but it will still be a reminder for us for the rest of our lives.”

Family members of those who died in the attack walked near the front of the parade, trailing behind Community Grand Marshals: the Orlando Police Department and Chief John Mina; the Orlando Fire Department; Orange County Mayor Teresa Jacobs, Orlando Mayor Buddy Dyer and Orlando Commissioner Patty Sheehan; and the Pulse Float with employees and family members.

Each carried photos of their loved one or waved a white fabric angel overheard that honored the deceased. Names of the 49 were memorialized in bright marker, eliciting thunderous applause and tears from parade onlookers.

Sandwiched in the middle of fanciful costumes and bejeweled bustiers were three groups that stood out for a different reason: their cry for stronger gun laws to ensure another Pulse-like attack doesn’t happen.

Much of the pride celebration was documented on social media.

The Most Colorful Parade got off to an emotional start with Orlando Police leading the procession.

Chief John Mina was among the community grand marshals who led the way. He was joined by his son Nick.

OPD Motors and Honor Guard leading the parade with OPD #pulse car and @ChiefJohnMina and his son Nick right behind! #ComeOutWithPride pic.twitter.com/0ovkHqnBEE

Parade marchers dressed as angels in honor of those whose lives were lost.

49 Angels for the #49 we lost in the #Pulse tragedy. #ComeOutWithPride pic.twitter.com/MpIYcKMGPR

And there was even a proposal.

There were plenty of rainbow flags and paraphernalia on display.

And there were even cute pilots kissing.

Folks around the world also sent their love to Orlando.

Our team sending love and solidarity across the Atlantic for @OrlandoPride today. #LoveWins #OrlandoPride pic.twitter.com/b5vufg3717

The night culminated with a firework display in honor of the 49 people who were slain.

What a way to end the night. Thank you for your love today. We'll see you next year! #comeoutwithpride #pulseorlando #lgbt #loveislove pic.twitter.com/uEcf6f5Tl1

Although the fireworks barge itself unexpectedly caught fire.

The fire started 5 to 10 minutes into the 25 minute fireworks display. Since no one was on board the barge, one of three shooting off fireworks in the middle of the lake, officials with the event allowed the show to continue.

Firefighters used a small boat to bring in the scorched barge. Remnants of firework tubes were still partially ablaze. A seven-member crew started hosing it down.

“We decided there wasn’t any threat to the crowd and let the display go on as planned,” said Jeff Prystajko, a spokesman for the event.

Watch news reports from WFTV, the Orlando Sentinel, below.

And another video of the event, below.