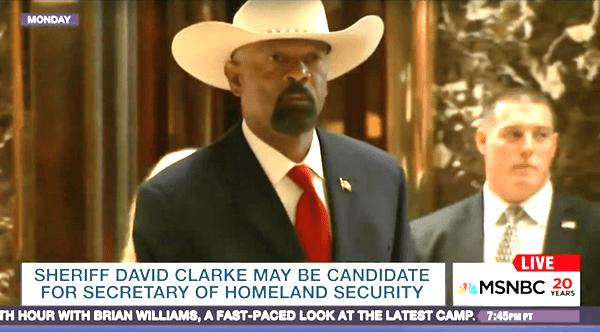 And the deplorables continue to multiply.

Sheriff David Clarke, one of Donald Trump’s short list contenders for Secretary of the Department of Homeland Security, called the Pulse nightclub massacre a distraction that Democrats used so they could focus on gun control and away from personal attacks on Hillary Clinton.

The Sheriff of Milwaukee County, Wisconsin made those remarks on his radio show earlier this year.

“Folks, we took the cheese. It refers to a mouse trap, with a nice big chunk of cheese on it. You know what’s going to happen if that mouse touches the cheese.

“That’s precisely what we did following the Orlando terror massacre. We allowed the left to use gun control as a shiny object to distract us from Mrs Bill Clinton’s flaws.

“We were hammering her over Benghazi, and what the left do is exploit these distractions, something came up, a shiny object… they know they can bury us in this thing that isn’t going to change anything.

“Don’t take the cheese! We spent a whole week taking about what they wanted us to talk about… it got us off of the momentum about the Clinton e-mail scandal.”

Clarke added: “We could have talked about a lot of things around Orlando, the failure of Barack Obama… we missed that opportunity. When the Democrats throw a shiny object out there, we need to take that and turn it into tying it around the neck of Mrs Bill Clinton.”

On the June 25th episode of his podcast, “The People’s Sheriff,” Clarke claimed that transgender Americans have mental disorders and painted them as one of several groups who live a “freakish lifestyle.”

The sheriff cited Walt Heyer, a former transgender author who has called for parents of transgender Americans to be jailed.

“Too often in this assault on the First Amendment, and this very totalitarian attitude from the left that any freakish lifestyle, any marginal lifestyle, is now considered part of the norm, and they’re shoving it down our throats. So if you’re not careful when you engage in this conversation, they’ll look for the trap, and they’ll catch you saying something that’s clumsy or not well articulated, and then they’ll just attack you — they’ll attack you with it. ‘Transgender phobic’ and all this other nonsense.”

Watch Lawrence O’Donnell and Roland Martin discuss the potential of Clarke becoming the next head of Homeland Security, below.

You can also watch Clarke’s speech from the RNC this year, below.