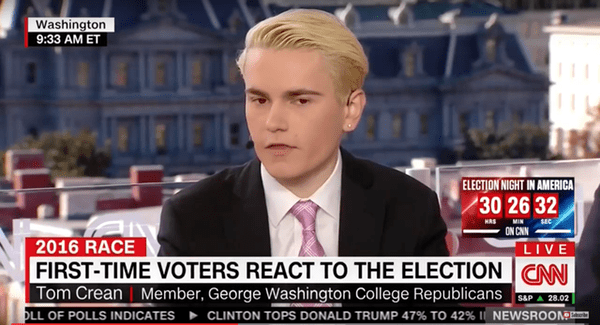 A young Republican resembling Harry Potter character Draco Malfoy went on CNN on Monday to explain why he’s supporting Donald Trump, and the internet had a field day.

CNN interviewed George Washington University freshman and first-time voter Tom Crean on Monday to discuss his support for Donald Trump. Crean told “CNN Newsroom” the Republican nominee is a “compassionate and intelligent man” whose words are “taken out of context and manipulated by his political enemies.”

Read some of the reactions to Crean’s CNN segment, below.

It's Draco Malfoy. They got Draco Malfoy to relate to young people. https://t.co/DRJiMfflzY

"When I was the leader of Slytherin House, I said that I wanted to Make Hogwarts Great Again so I can identify with this movement" pic.twitter.com/hSMztEybGP

Previous Post: « North Carolina Lawmaker Comes Out as Bisexual Because of HB 2 – VIDEO
Next Post: ‘Colbert’ and ‘The View’ Cover the Election, Plus More TV This Week »