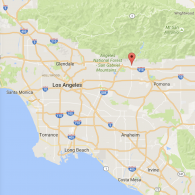 CALIFORNIA. One person killed, three wounded in shooting at polling place in city of Azusa. Active shooter is heavily armed, police say: “Few details were released about the shooting, which occurred sometime after 2 p.m. in a residential neighborhood in the area of Fourth Street and Orange Avenue, said Officer Jerry Willison of the Azusa Police Department. ‘This is a very volatile and critical situation,’ he said.”

HERSTORY. Hundreds wait in line for hours to leave “I Voted” stickers on grave of Susan B. Anthony: “The cemetery where women’s suffrage activist Susan B. Anthony is buried extended its hours Tuesday “to accommodate those wishing to celebrate their vote” at her gravesite. Mount Hope Cemetery in Rochester, N.Y., will be open until polls there close at 9 p.m. ET.”

SOUTH CAROLINA. Lindsay Graham voted for Evan McMullin: “‘Well, I voted for Evan,’ Graham said. ‘He shares my view of the world, he was on the ballot, and I couldn’t go where Trump was taking the party, and I certainly couldn’t go where Clinton is going to take the country either. So I was sort of a man without a choice, and I thought Evan was, for a lack of a better word, a protest vote for me,” the senator added. “I couldn’t write anyone in in South Carolina.'”

THE GEORGE W. BUSHES. George and Laura didn’t vote for anyone for president: “George W. Bush and his wife, however, did vote for down-ballot candidates, according to reports. Reports had suggested both presidents Bush could vote for Clinton, though it was not immediately known for whom the elder bush cast his ballot.”

NASTY WOMAN. Ana Navarro gets a standing ovation on The View: “The ladies then showed a supercut of some of Navarro’s most famous moments on CNN over the last year from Navarro calling out Scottie Nell Hughes to her notable catch-phrases like “50 shades of crazy” and calling Trump a racist in two languages. After airing the video the audience cheered, but Whoopi Goldberg stood up from the head of the table and gave Navarro a standing ovation.”

CAKES. There are terrifying Trump and Clinton cakes among us.

The award for most expert trolling since Obama sent up his budget with Denali on the cover goes to Cindy McCain pic.twitter.com/EA4OsnETGD

ARIZONA. Students walk out of two Arizona high schools to canvas against Joe Arapaio: “Uniting under the hashtag #StudentsAgainstArpaio, students at two Phoenix high schools have staged a walk-out in protest of Maricopa County Sheriff Joe Arpaio, who is seeking a seventh term. Students at Maryvale and North high schools announced the walkout just after noon on Tuesday.”

VOTING IS SEXY. Towleroad Instastud Steven Araujo voted. Did you?