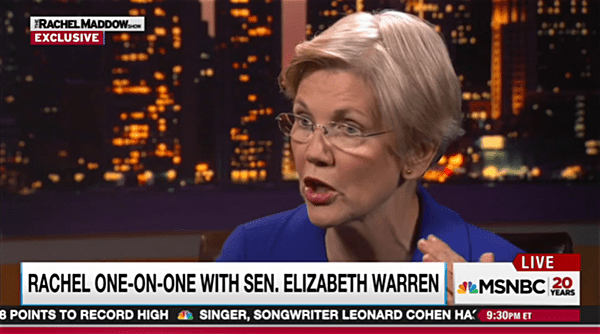 Senator Elizabeth Warren sat down with Rachel Maddow on Thursday night for her first interview since Donald Trump was elected President.

The exchange was at times emotional, with Warren saying, “This is hard…It happened.”

Warren suggested that she and other Democrats would work with president-elect Trump on a issues on which they agree–particularly those of concern to financially struggling Americans–but Warren was resolute in her commitment to human rights.

“There’s a lot we’re going to try and work with you on,” Warren said, “but on these core issues, of treating every single human being in this country with dignity, we stand up and we fight back. We do not back down we do not, we do not comprise, not today, not ever.”

Warren added, “You can either lie down, you can whimper, you can pull up in a ball, you can decide to move to Canada or you can stand your ground and fight back.”

During an emotional exchange about Hillary Clinton, Warren said, “I respect what she has done and tried to do for this country and for people around there world.”

With news of the race for who will be the next chair of the DNC already underway, Warren said she has no desire to obtain the post but is eager to hear more from contenders Keith Ellison and Howard Dean.

Watch the two part interview, below.