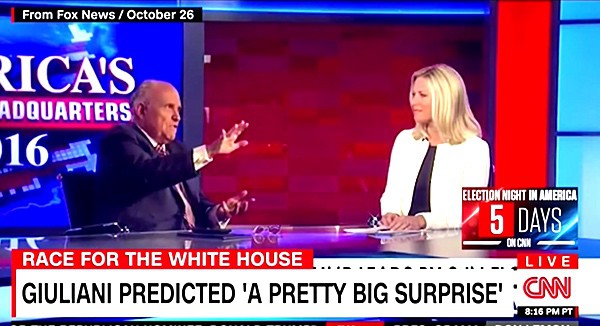 CNN’s Don Lemon spotted something that suggests other members of Trump’s brigade knew about the Comey letter before it was coming. He played a clip for Michael Moore of Rudy Giuliani bragging about an upcoming “surprise” like a giddy child who can barely keep a secret.

At the conclusion of an interview on October 26 about the presidential election, Giuliani (while speaking about FBI Director Jim Comey) said, “I think he’s got a surprise or two you’re going to hear about in the next two days. I’m talking about some pretty big surprises.” When MacCallum prompted the Mayor for follow-up, he coyly continued, “You’ll see.”

…“I saw something, and when I saw it, it caught my attention,” Lemon said to Michael Moore of the prescient clip.

After the clip rolled, Moore seemed to agree. “It sure sounds like he knew something. This man is a former federal prosecutor, worked for the Justice Department, that if somebody slipped him some information there, that is amazing.”

For more on this, watch Rachel Maddow’s excellent and deeply disturbing report.

Writes The Daily Beast on the same topic:

The man who now leads “lock-her-up” chants at Trump rallies spent decades of his life as a federal prosecutor and then mayor working closely with the FBI, and especially its New York office. One of Giuliani’s security firms employed a former head of the New York FBI office, and other alumni of it. It was agents of that office, probing Anthony Weiner’s alleged sexting of a minor, who pressed Comey to authorize the review of possible Hillary Clinton-related emails on a Weiner device that led to the explosive letter the director wrote Congress.

Hours after Comey’s letter about the renewed probe was leaked on Friday, Giuliani went on a radio show and attributed the director’s surprise action to “the pressure of a group of FBI agents who don’t look at it politically.”

“The other rumor that I get is that there’s a kind of revolution going on inside the FBI about the original conclusion [not to charge Clinton] being completely unjustified and almost a slap in the face to the FBI’s integrity,” said Giuliani. “I know that from former agents. I know that even from a few active agents.”

Previous Post: « Costumed Assailants Assault Gay Man in NYC Hotel Elevator
Next Post: ‘Notes From the Field’ Should Be Required Viewing for All Americans: REVIEW »