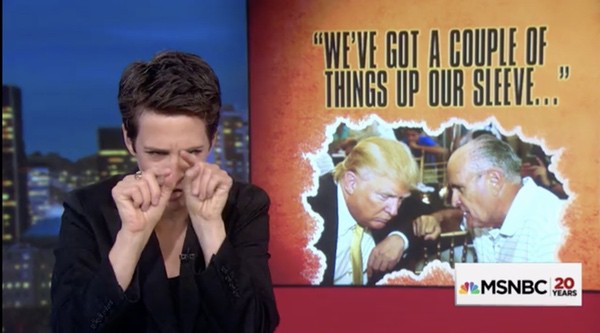 Earlier we posted about Don Lemon’s suggestion to Michael Moore that Trump surrogate Rudy Giuliani knew about the Comey letter two days before it was released and couldn’t help but let on that he knew a big “surprise” was coming.

Last night, Rachel Maddow offered a brilliant segment connecting the dots for all of us – from Trump’s top aides and Breitbart.com to the latest false reports from their lackeys at FOX News.

Maddow starts back in April, when the New York field office of the FBI brought a bunch of anti-Hillary Clinton Breitbart stuff to a meeting:

This week, The New York Times and The Wall Street Journal reported that there has been, I guess you’d call it, like, a breakout? There’s been a breakout from this otherwise insular little Breitbart.com corner of conservative media and political activism.

These agents in the New York field office reportedly decided that they needed to look into what Breitbart.com was saying about Hillary Clinton. It all sounds terrible. Sounds totally legit. We should look into that. We’re the FBI.

We now know, based on this new current reporting, that what the New York agents brought prosecutors at meeting wasn’t just generic anti-Hillary Clinton stuff, or Hillary Clinton stuff they had cooked up on their own. No, it was this stuff that had been cooked up at Breitbart. It is the stuff that came from the ‘eco-sexuals having sex with trees’ website. That is what they had, that is what they brought to career Department of Justice prosecutors, and reportedly the career prosecutors were like, “uhh, where you did you get this? I’m not sure that’s a case.”

Thanks to lord knows whatever’s going on, apparently, inside that New York field office of the FBI, that little adventure, which is now reportedly over, that little adventure of the Breitbart.com readers inside this one FBI field office, that’s what’s out now in today’s news five days before the election. That’s what was breathlessly reported on Fox News last night based on FBI sources, breathlessly reported on Fox last night as a whole new Hillary Clinton FBI investigation. One that was definitely going to lead to an indictment.

Thursday morning on FOX News, Bret Baier walked back the “breathless nighttime report about ‘possible indictments’ connected to the Clinton Foundation” he had given on Wednesday night, but the Trump campaign is running with the false report anyway. “The damage is done” according to cheery Trump campaign manager Kellyanne Conway.

And the Trump campaign is running with the false story of course.

“Of course the Trump campaign is running with this. They bought and paid for this. Trump’s biggest donor paid the people who created this story to create this story. And so of course the Trump campaign is going to use it. It’s one thing to cook up a dubious conspiratorial political attack and fling it at your political opponent. It’s another thing altogether to cook up a dubious conspiratorial political attack like this – and have the FBI fling it at your opponent. And that is what the FBI, at least part of the FBI, is now doing in this election. They’re using stuff from Breitbart.com as their research, as their evidence, and then they’re leaking about their new investigation into this evidence to FOX News, right before the election.

Maddow then gets into the Rudy Giuliani “surprise” disclosure also brought up by Don Lemon last night.

“How did Rudy Giuliani know that? Did somebody at the FBI leak to the Trump campaign two days in advance that the FBI was about to throw an anti-Hillary Clinton grenade into the presidential race?”

Spencer Ackerman, national security editor for The Guardian, who wrote another recent must-read article on the topic, The FBI is Trumpland, joins Maddow to talk about it all.