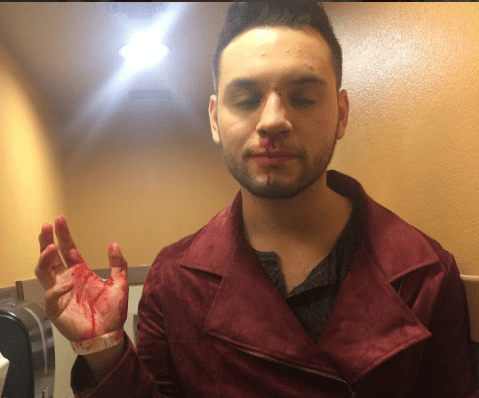 A gay Latino student at Texas State University says he was attacked for wearing high heels while walking home from an LGBT nightclub early Sunday.

Alejandro Camina says his attacker punched him in the face, called him a “faggot” and ran off after calling him out for wearing high heels. The incident happened as at about 1 a.m. Camina was on his way home from the Stonewall Warehouse in San Marcos, a booming college town halfway between Austin and San Antonio.

“A girl witnessed the whole thing and she helped me up and took me to the restroom of Jack in the Box to get me cleaned up,” Camino wrote on Instagram. “I was bleeding too much from my nose and I had blood all over my hands.”

He went on to link the incident to President-elect Donald Trump’s victory.

“It was bad before, but now its worse,” Camina wrote. “You hear about all these hate crimes and acts of bigotry happening and never would you think it would happen to you. I am lucky to be alive. This was a hate crime and it can happen to you too so be careful.”

In the wake of the election last week, someone posted fliers on the Texas State campus threatening to “arrest and torture” university leaders who are in favor of diversity:

The Austin Stateman reports that when police arrived after Camina’s attack, they found him holding his nose and observed swelling and bruising to his face. The attacker is described as a thin, white male wearing a gray tank top, and standing 5’6” with blond facial hair.

Camina launched a GoFundMe page to cover his medical expenses that raised more than $1,000 in one day.