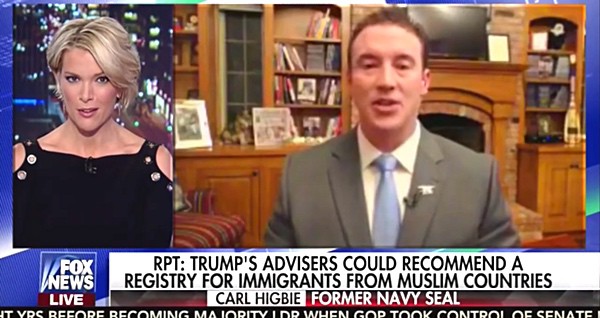 After Higbie defended the registry, Megyn Kelly questioned him about its potential for abuse:

“You don’t care that there’ll be some sort of a slippery slope where Muslims may get lumped into some group, and some aggressive law enforcement actor in the future might abuse that list? …

Replied Higbie: “Look, there’s always a case for abuse in this thing.”

After Higbie continued to make excuses, and cited Japanese internment camps, where more than 100,000 Japanese were forcibly detained under orders from FDR, as precedent, Megyn Kelly was aghast:

“C’mon, you’re not proposing that we go back to the days of internment camps, I hope. You know better than to suggest that. That’s the kind of stuff that gets people scared, Carl….You can’t be citing Japanese internment camps as precedent for anything the President-elect is going to do.”

Actor George Takei, who at five years old was detained with his family in one of the camps in Arkansas, is justifiably alarmed: “This is dangerous. Have we failed to learn the lessons of the past? I worry for America.”

This is dangerous. Have we failed to learn the lessons of the past? I worry for America. https://t.co/1Ol7DeLuDC