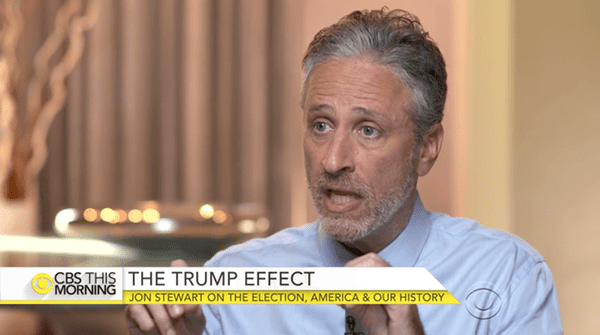 Jon Stewart shared his analysis of the 2016 election in a recent interview with Charlie Rose.

Stewart remains optimistic about America despite Trump’s victory: “I don’t believe we are a fundamentally different country today than we were two weeks ago. The same country that elected Donald Trump elected Barack Obama.”

Of concerns raised by people of color, minorities, Muslims, immigrants, women (the list goes on), Stewart said, “I feel badly for the people for whom this election will mean more uncertainty and insecurity. But I also feel like this fight has never been easy.”

Stewart blasted Republican leaders Paul Ryan and Mitch McConnell for their cynical political gamesmanship that led to Trump’s victory. Stewart described their strategy as, “I’m gonna make sure that government doesn’t work. And them I’m going to use its lack of working as evidence of it.”

He added, “Donald Trump is a reaction not just to Democrats but to Republicans. He is not Republican. He’s a repudiation of Republicans. But they will reap the benefit of his victory, in all of their cynicism.”

Stewart went on to blast liberals for painting all Trump supporters and voters as agreeing with the most hateful and racist statements he has made:

“In the liberal community you hate this idea of creating people as a monolith. Don’t look at Muslims as a monolith. They’re individuals, and that’s ignorance. But everyone who voted for Trump is a monolith, is a racist. That hypocrisy is also real in our country.”

Of Trump’s rhetoric, Stewart continued, “I would rather have this conversation openly and honestly than in dog whistles.” Referring to Trump and possibly Steve Bannon, Stewart mimicked conversations he has heard and offered his response: “”There might be an anti-Semite that’s working in the White House.’ I’m like, ‘Have you listened to the Nixon tapes?’ Forget about working for the president — the president.”