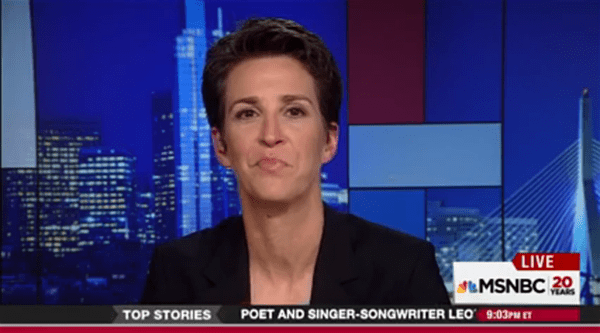 On Friday night Rachel Maddow took a look at Vice President-elect Mike Pence’s history of advocating extreme anti-gay positions and why those positions were largely ignored by the national media.

Said Maddow of Pence, “there is no statewide elected official anywhere in America who has more to brag about in terms of his anti-gay credentials.”

MUST READ: Here’s a Recap of Mike Pence’s Attacks on LGBT Rights Just in Time for Tonight’s VP Debate

Fighting back tears, Maddow added that thanks to Pence, gay couples in Indiana “faced 18 months in prison and $10,000 fine for applying to get married” before the Supreme Court made marriage equality the law of the land.

Maddow also pointed out that Pence advocated diverting federal money away from AIDS programs towards funding conversion therapy–the barbaric and debunked practice that aims to ‘cure’ people of being gay.

And yet, Pence’s record was largely ignored by the mainstream national media.

Previous Post: « Cross ‘Speedo Santa Run’ Off Your Bucket List At Provincetown’s Holly Folly Dec. 2-4
Next Post: Gov. Andrew Cuomo to Gays, Minorities: New York Will Stand Up For You »