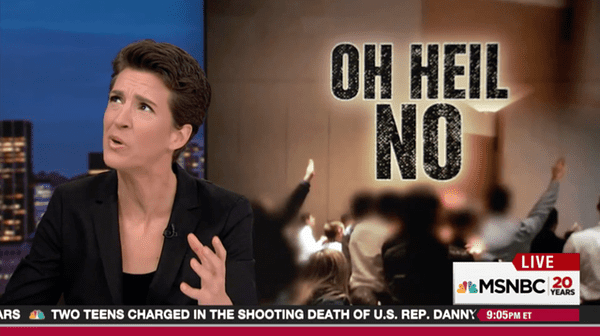 On Monday night, Rachel Maddow took a look at the rise of American white supremacists in the wake of Donald Trump’s election as the next president of the United States.

The conference boasted twice the amount of attendants this year, in large part thanks to Donald Trump and refusal to condemn this racist strain in the American electorate (to say nothing of his tacit endorsement of white supremacy throughout the campaign, such as the time he refused to condemn former KKK grand wizard David Duke.)

“This is our national politics now,” Maddow said, referring to the fact that news organizations spent much of yesterday debating over whether Spicer said ‘hail, Trump’ or ‘heil, Trump’ in his closing remarks at the white supremacist conference.

Maddow described what Trump should do in clear and simple terms:

“If you don’t want that kind of support, if you do not want to be an inspiration to those kinds of people you do actually have to overtly denounce them…you have to denounce them and say what is wrong about them specifically because in the absence of your doing that they are gaining power because of their perceived connection and alliance with you.”