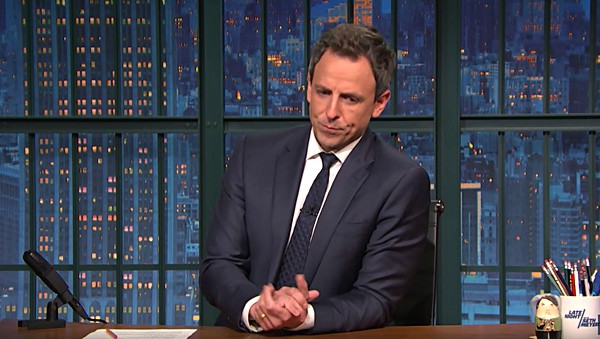 “Well that was a real grab in the pussy. I’m sorry to use language like that but last time I checked the electoral college was fine with it.”

Meyers talked about putting his son to bed on Tuesday night and telling him that when he woke up he might have the first female president….”so I recalibrated and I told him for the first time in history our president would be a steak salesman.”

Then Meyers got more serious, and lamented the fact that we don’t, in fact, have our first female president:

“I do really feel for the parents who had to explain this to their kids this morning—especially parents with daughters because a lot of them, like me, probably thought Hillary would be our first woman president. But she won’t be. But that does mean—that does mean—that someone’s daughter is out there right now who will one day have that title….The fact is, we don’t know who you are, but I imagine this moment today will be a defining one for you. One that will make you work harder, and strive farther, and whoever you are, I hope I live to see your inauguration.”

Meyers held back tears as he talked about the hopes of his mother:

“And I hope my mom does, too. She was really excited yesterday, and I was really sad for her. My mom’s name happens to be Hillary. ”

“I felt a lot of emotions last night and into today. Some sadness, some anger, some fear. But I’m also aware that those are the same emotions a lot of Trump supporters felt, emotions that led them to make their choice, and it would be wrong for me to think my emotions are somehow more authentic than their emotions.”

He gave a nod to the minority communities that might feel scared right now:

“As a white man, I also know that any emotions that I am feeling are also a fraction of those felt by the LGBTQ community, African-Americans, Hispanic-Americans, Muslim-Americans and any number of the immigrant communities so vital to our country, so hopefully the Trump administration and Trump supporters will be compassionate toward them because they need your compassion.”

But he said he has hope:

“I am hopeful for President Trump, because hope is always the best possible path to take. And one thing that makes me hopeful is we know from interviews he’s given over the years that he has, at any given point, held every position on every issue. He’s been pro-choice, pro-life, for the Iraq war, against the Iraq war — pretty much his only consistent position has been anti-Rosie O’Donnell. So I’m hopeful that he’s not actually a racist and that he just used racist rhetoric to court voters, because when you’re courting someone you’re always willing to pretend you’re something you’re not.For example, when you first start dating someone, you’ll agree to go apple picking.”