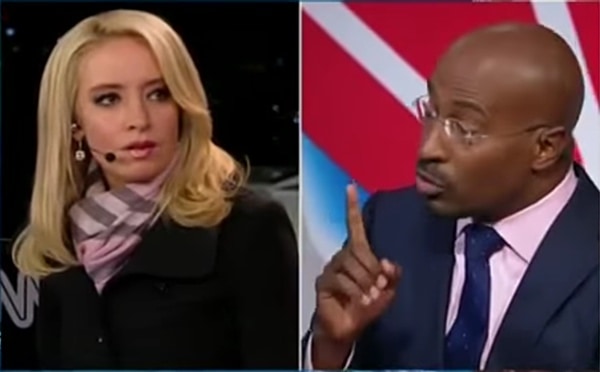 Reacting to the protests that took place in cities across the nation last night following the election of Donald Trump, CNN commentator Van Jones got into a heated argument with Trump surrogates Jeffrey Lord and Kayleigh McEnany.

Jones tried to explain to the Trumpets why people are afraid right now, a concept they couldn’t seem to grasp.

Said Jones: “They’re afraid because he said over and over again that he wanted to ban people of their faith. That lands like a bomb in the lap. You want to explain to me why people who are scared shouldn’t be afraid…

Objected McEnany: “But for you to say internment camps….”

Jones: “I didn’t say internment camps. People are afraid of that.

McEnany: “But you should correct that. That’s not true. Donald Trump has never…”

Jones: “You guys won and you need to back off! You need to have a little bit of empathy and understanding for people who are afraid because your candidate has been one of the most explosively provocative candidates in the history of our country. and there’s a price to be paid for that. I am not finished and I am not going to be talked over tonight. I’m not. You have people who are terrified and you have to take some responsibility for it.”