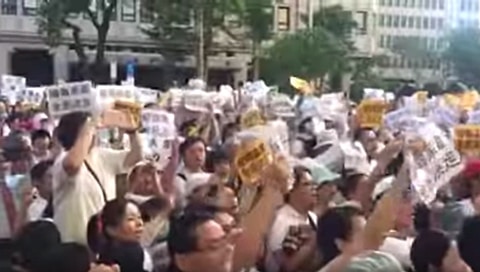 Thousands of protesters stormed the Legislative Yuan building in Taiwan yesterday as lawmakers reviewed a bill that would legalize same-sex marriage in the country and be the first place in Asia to do so.

On Thursday, thousands of people protesting legalization, dressed in white, occupied the street outside the judiciary committee proceedings in Taipei, denouncing what they called a “black box” in which the bills were being considered. They chanted demands for the legislature to hold public hearings on the issue, and some called for a plebiscite. Late Thursday, the legislative caucuses of the D.P.P. and the Kuomintang agreed to each hold a hearing to air opinions on legalization before continuing deliberations.

Among the opposition is the Alliance of Religious Groups for the Love of Families Taiwan, which was formed three years ago to block the 2013 bill, and is now focusing its attention on presenting its views to legislators.

…David Tseng, spokesman of the rally’s organiser, The Happiness of the Next Generation Alliance, said that while the group supported equal rights for same-sex partners in certain areas, marriage should only be between a man and a woman.

“Now they want to amend the law to do away with the ‘father’ and ‘mother’ altogether,” he said.

“We are different from the West. In Eastern culture, we place great importance on filial piety to one’s father and mother. This is a virtue we must keep,” he said.