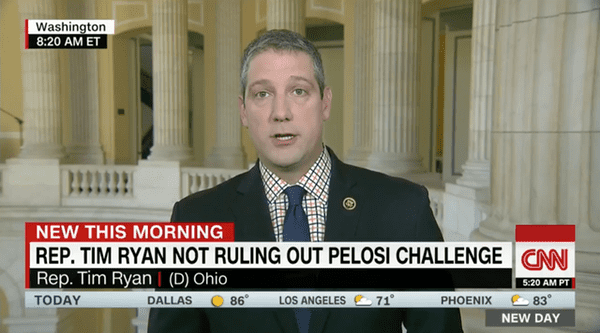 Democratic Congressman Tim Ryan of Ohio suggested on Thursday that it would be the ‘definition of insanity’ to re-elect Nancy Pelosi as the House Minority Leader following Donald Trump’s presidential win.

Ryan himself might challenge Pelosi for the leadership role. He has said he would do a better job at connecting the party to blue collar rust-belt voters like those in his district.

“The definition of insanity,” he said, is to do the “same thing over and over again and keep getting the results.”

Ryan added: “I think there’s a lot of support for going in a different direct. I really do.”

At the same time, a quiet lobbying push has emerged to recruit the fifth-ranking Democratic leader, Joe Crowley of New York, to challenge Pelosi for the top spot.

Crowley pointedly refused to say Thursday if he would challenge Pelosi.

When asked Thursday if she was concerned about a leadership battle, Pelosi said, “No.”

“The next two weeks are really going to be about us figuring out [what’s next]—and it may be Nancy Pelosi but maybe it’s not. Who’s best to go in these communities and these states and help pull our voters back into the Democratic fold so we can take the House back,” he added.

Ryan and other Democrats pushing to delay leadership elections scored a major victory Tuesday when Pelosi (D-Calif.) acquiesced to their demands following a tense back and forth.

Watch recent interviews in which Ryan says he’s not ruling out a run for the leadership, below.

Rep. Tim Ryan, whose name has been floated as a potential opponent to Pelosi's re-election bid, outlines his vision https://t.co/24UK2HYKuu pic.twitter.com/6cMbFS0zQj

Democratic Rep. Tim Ryan: "I'm not" ruling out a challenge to Pelosi for a leadership role https://t.co/6OZtrg079U https://t.co/7vQg2OJiCM

UPDATE. Ryan has thrown his hat in the ring for House minority leader: