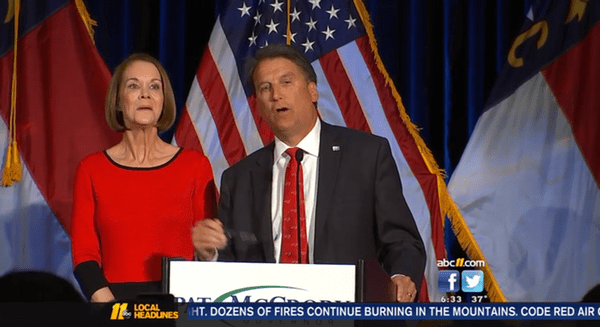 McCrory, who infamously signed HB 2 into law triggering a massive backlash, is arguing that fraudulent absentee voting has taken place which benefitted Cooper.

Concerns about duplicate handwriting on mail-in ballots are at issue in Halifax County and Bladen County. The campaign also points to money flowing from the state Democratic Party to local groups in Bladen and the 11 other counties to promote voter turnout.

Earlier Wednesday, the results of a quick investigation by a forensic document examiner has found indications that at least 167 mail-in absentee ballots cast in Bladen County were written by seven people.

Time constraints prevented the examiner from looking at the entire batch of votes cast as straight Democratic Party tickets with similar handwriting. They included write-in ballots for a candidate named Franklin Graham. There are about 400 ballots with Graham’s name and about 275 envelopes under scrutiny.

Complicating the matter is the fact that some of the handwriting has been linked to individuals paid by a local community association which in turn receives funds from the NC Democratic party to encourage voter turn out.

It is possible that those individuals were legally assisting voters in filling out their ballots, hence the same handwriting appearing on multiple ballots. However, such assistance must be disclosed on the submitted ballot, and as the News and Observer notes, “few if any such disclosures were made.”

Watch a news report from ABC 11, below.

Previous Post: « Indulge in Savory Dining, Shopping and More in Las Vegas
Next Post: ‘Fake News’ Writer Boasts: ‘Trump is in the White House Because of Me’ »