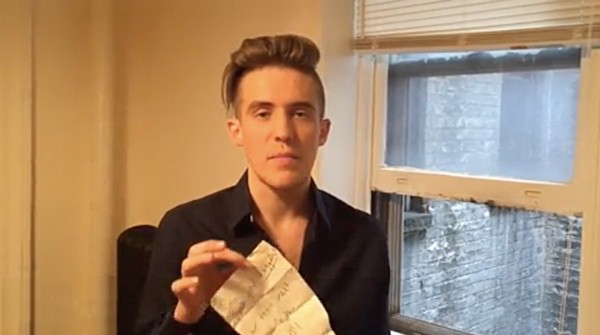 Kyle Arnold, an Albany bartender, tells the Times Union that he received a hateful note containing an anti-gay slur under the windshield wiper of his car that was signed “Trump Nation”.

The note said “We don’t want (anti-gay slur) in this country!!!” according to the paper.

“I felt shock and then more heartbroken than anything else,” said Arnold, a server and bartender at El Loco Mexican Cafe. He has always felt safe and comfortable being openly gay while living and working in the Lark Street neighborhood, one of the most diverse in the city.

“I could feel the anger coming through that letter,” he said. “I didn’t feel fear for myself because I’ve gotten to the point that I’m confident and proud to be gay. I worried more about attacks on women, Muslims, Hispanics and people of color in light of Trump’s rhetoric.”

…Arnold was reluctant to come forward to share his story. He does not want to stir hatred or incite violence. But he also does not want to endure hate speech in silence. His first impulse was not to hit back at the letter writer in anger, but to invite the person to sit down over a cup of coffee or a cocktail.

Arnold believes that love trumps hate, as a rainbow-colored sign displayed in a nearby Willett Street townhouse put it. He has empathy for people who feel like outsiders, put down, voiceless and forgotten.