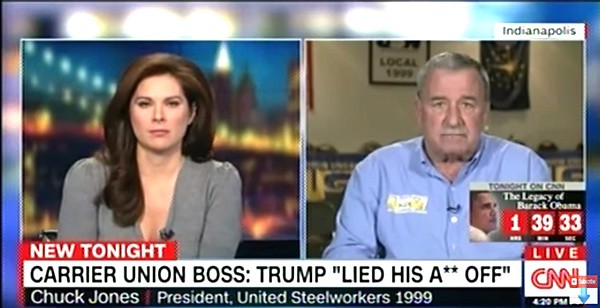 The president-elect tweeted shortly after Jones had appeared on CNN’s “Out Front” with Erin Burnett, expanding on his comments Tuesday when he said that Trump “lied his a— off” when he announced a deal with Carrier Corp. that resulted in the heating, ventilation and air conditioning company’s decision to keep a number of jobs in Indiana that were going to be relocated to Mexico.

“I think he ought to make sure he gets all the facts straight before he starts talking about what he’s done,” Jones told Burnett.

Trump had said some 1,100 workers would keep their jobs. The real number is 800.

Half an hour after Trump tweeted about Jones on Wednesday, the union leader’s phone began to ring and kept ringing, he said. One voice asked: What kind of car do you drive? Another said: We’re coming for you.

He wasn’t sure how these people found his number.

“Nothing that says they’re gonna kill me, but, you know, you better keep your eye on your kids,” Jones said later on MSNBC. “We know what car you drive. Things along those lines.”

“I’ve been doing this job for 30 years, and I’ve heard everything from people who want to burn my house down or shoot me,” he added. “So I take it with a grain of salt and I don’t put a lot of faith in that, and I’m not concerned about it and I’m not getting anybody involved. I can deal with people that make stupid statements and move on.”

Of course, personal attacks against private citizens are nothing new for Trump:

How Trump works. Bully-in-chief. Everyone he threatens should use one of his favorite tactics against him: file a lawsuit. https://t.co/e6NGttNUVK

2. Throughout the campaign Trump’s lawyers threatened media, others w/lawsuits on behalf of him, Melania. We have got to hit back same way.

What Trump did re: steelworker Chuck Jones should not shock. Same as Kahn family. Same as Machado, etc. Media needs to stop w/"moderating"