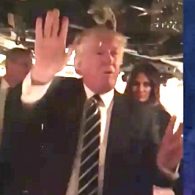 TRUMPONOMICS. Why one Nobel Laureate is worried about them: “The idea of tearing up trade agreements or imposing tariffs is not a good way forward, so I’m worried about that. Maybe it is all talk. It would be bad for the world economy and it would be bad for the U.S. to proceed along those lines. But trying to bring back jobs that have been lost, it’s an extremely inefficient and expensive thing to do. So we should be looking at other ways forward. I don’t think the rich should be paying less in tax, they should be paying more, in my opinion.”

NORTH CAROLINA. Republican power grab for the Supreme Court? “Speculation is growing in the Tar Heel State that Republicans will attempt to add two seats to the state’s Supreme Court next week, tilting the balance toward conservatives. The court currently has seven members, who are elected to eight-year terms without term limits. With the surprising election of Mike Morgan to the bench last month, Democrats reclaimed a 4-3 edge.”

TEXAS. Lawmaker seeks to strike sodomy ban: “Every day in Texas, more than an estimated half-million people are breaking a law that’s on the books, but unenforceable. It’s technically illegal to be gay in Texas. The law, passed in 1974, makes homosexual conduct a class C misdemeanor, punishable by up to 180 days in jail and a $2,000 fine…Now, Rep. Joe Moody, D-El Paso, wants to repeal the language, which could be used to create mischief if any public official really wanted to try to prosecute someone.”

REMAKES. Greg Berlanti to direct Little Shop of Horrors for Warner Bros: “This one will be a musical, a fresh version of the 30-year-old Frank Oz-directed film. That was based on the Roger Corman-directed 1960 low-budget sci-fi campy tale about a clumsy young man who raises a plant, discovers it is carnivorous, and kills to keep it fed.”

CATFIGHT. Jocelyn Wildenstein accused of assault with scissors, claws:”Wildenstein got into an argument with her 49-year-old beau, fashion designer Lloyd Klein, inside their apartment at the Trump World Tower on First Ave. by E. 47th St., cops said. She scratched his face with her nails, and cut his chest with a pair of scissors at about 11 p.m., police said.”

LOVE IS A DRAG. Behind the secret ’60s gay album: “More than 50 years ago, an album appeared that let the love that dare not speak its name sing out loud. The man who voiced the male-to-male love songs contained on the album wasn’t identified on the cover. Neither were the musicians who played on it, the man who produced the music, nor the two male figures who lurked in the dark shadows that enveloped the cover. The disc, titled Love Is a Drag in 1962, featured a sincere crooner interpreting American standards previously recorded only by women, like My Man, The Man I Love and Mad About The Boy.”