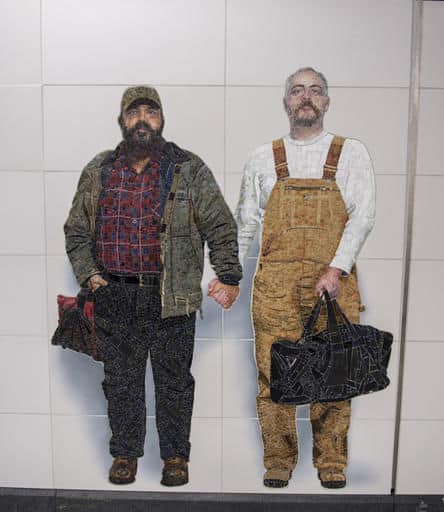 NYC’s Second Avenue subway, a line that has been planned since the 1910s and under construction since 1972, is finally opening on January 1. Its stations features public art by Chuck Close, Vik Muniz, Jean Shin and Sarah Sze.

At the 72nd street station features a mosaic mural by Vik Muniz called “Perfect Strangers” which depicts “the different people that riders are likely to encounter on their daily commutes” according to the AP, and among them is the above picture of gay love:

That depiction of love between gay men is a rarity in public art, experts say.

“It was like winning the lottery,” Thor Stockman, 60, said of finding out that he and his husband of 3 ½ years, Patrick Kellogg, were going to be part of artist Vik Muniz‘s “Perfect Strangers,” a series of life-size mosaic portraits of everyday New Yorkers gracing the walls of the new subway station at 72nd Street. But “part of me wishes that it wasn’t a rarity, that it wasn’t remarkable.”

More on the new subway stations here and here.