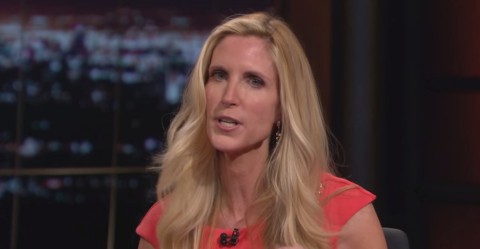 Ann Coulter denied allegations that a tweet she sent yesterday referenced the white nationalist message “We must secure the existence of our people and a future for white children.”

The cryptic tweet “14!” was quickly seized upon by a frenzied Internet with many speculating that the tweet was a reference to the “14 words” that white nationalism centers around.

Mikel Jollett tweeted this screen grab from Wikipedia which notes that the slogan “Fourteen Words” was “coined by David Lane, a member of the white supremacist group The Order, and publicized through the efforts of the now defunct Fourteen Word Press which helped popularize it and other writings of Lane. The first slogan is claimed to have been inspired (albeit not by Lane or by Fourteen Word Press) by a statement, 88 words in length, from Volume 1, Chapter 8 of Adolf Hitler’s Mein Kampf:”

.@AnnCoulter Not that there was any doubt, but you're just admitting to be a white nationalist. pic.twitter.com/e52VyJnEwW

A number of Coulter fans replied to her tweet with the cryptic “88” which Wikipedia explains as follows:

Whereas some Neo-Nazis combine the number 14 with 88, as in “14/88” or “1488” with the 8s representing the eighth letter of the alphabet (H), with “HH” standing for “Heil Hitler”, Lane used 88 to refer to his 88 Precepts with “14-88” representing “14 Words and 88 Precepts” which are fundamental doctrine in the racialist pagan religion of Wotanism founded by Lane and Ron McVan involving the “Pyramid Prophecy” which posited that there was a code within the King James Version of the Bible.The “14/88” symbol has since been used by other white supremacists.

This is appalling. So are the number of people replying with "88." This is now becoming normalized "discourse" from powerful media members? https://t.co/Ebbmc4KOSL

However, Coulter and others pointed out that “14!” was in fact a countdown to the inauguration of president elect Donald Trump. Coulter herself was particularly incensed, telling Mediaite that the tweet was “the same thing I’ve meant the last 50 times I tweeted the number of days obama has left in office.”

“Are you retarded?” she asked, because clearly using “retarded” as an insult is just fine.

Watch Coulter freak out on Trump’s election victory below.