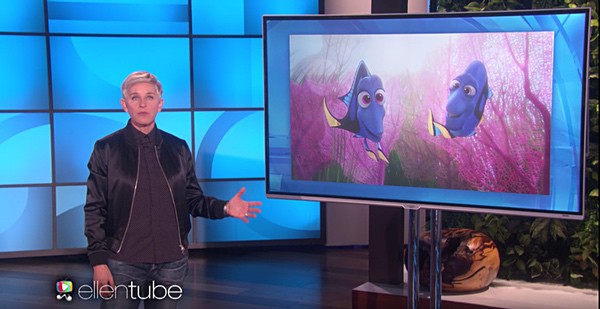 You may have heard that while millions were protesting Donald Trump’s unconstitutional, unconscionable, immoral Muslim travel ban in the streets over the weekend, the White House was screening Finding Dory.

This was not lost on the movie’s star, Ellen DeGeneres, who took the opportunity on her show to explain what the movie’s all about.

“Finding Dory is about a fish named Dory and Dory lives in Australia, and these are her parents, and, uh, they live in America, and I don’t know what religion they are but her dad sounds a little Jewish, doesn’t matter, ” Ellen explained.

She then slammed the unnecessary and useless practice of building walls:

“Dory arrives in America with her friends Marlon and Nemo and she ends up at the Marine Life Institute behind a large wall and they all have to get over the wall. And, you won’t believe it, but that wall has almost no effect in keeping them out.”

“Even though Dory gets into America she ends up separated from her family, but the other animals help Dory. Animals that don’t even need her, animals that don’t even have anything in common with her. They help her even though they’re completely different colors, because that’s what you do when you see someone in need. You help them.”