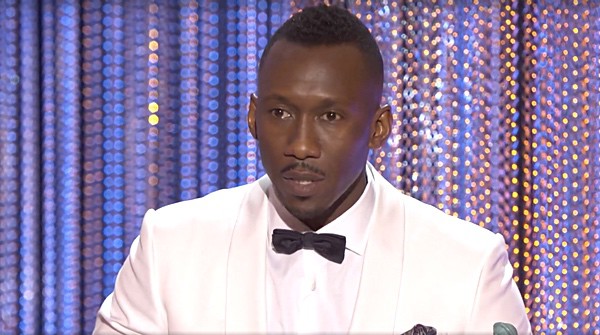 Mahershala Ali delivered an incredible SAG Awards acceptance speech, highlighting his Muslim faith and the themes of Moonlight to convey a powerful message about persecution and acceptance.

Moonlight highlights three parts of a young gay man’s life. Ali plays Juan, a drug dealer who becomes a father figure to the central character Chiron as he tries to evade bullies.

“I think what I’ve learned working on Moonlight is we see what happens when you persecute people,” said Ali. “They fold into themselves. What I was so grateful about in having the opportunity to play Juan was playing a gentleman who saw a young man folding into himself as a result of the persecution of his community, and taking that opportunity to uplift him and tell him that he mattered. And tell him that he was okay. And accept him. And I hope we do a better job of that.”

“When we get caught up in the minutia, in the details that make us all different, I think there’s two ways of seeing that.,” he added. “There’s an opportunity to see the texture of that person, the characteristics that make them unique. And then there’s the opportunity to go to war about it. And to say that that person is different than me, and I don’t like you, so let’s battle.”

Ali then made a resonant point about religion:

“My mother is an ordained minister. I’m a Muslim. She didn’t do backflips when I called her to tell her when I converted seventeen years ago. But I tell you know, you put things to the side. I’m able to see her. She’s able to see me. We love each other. The love has grown. And that stuff is minutia. It’s not that important.”

Previous Post: « WH Chief of Staff: ‘There’s No Regret’ That Jews Were Left Out of Holocaust Remembrance Statement
Next Post: Starbucks to Hire 10,000 Refugees »