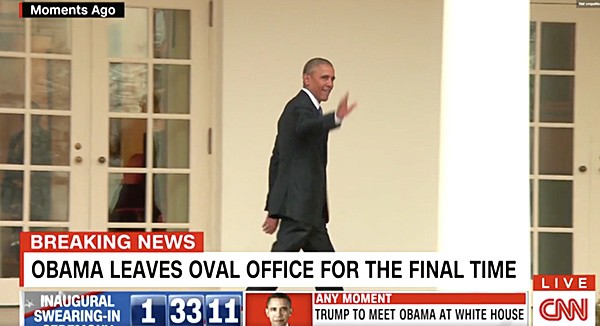 President Obama made his final walk from the Oval Office this morning, waving to reporters. When asked if he had any final words for the American people, Obama said “thank you.”

The President also tweeted a farewell:

It's been the honor of my life to serve you. You made me a better leader and a better man.

As we look forward, I want our first steps to reflect what matters most to you. Share your thoughts with me at https://t.co/fGUxlpLVue.

He also posted a message to Facebook: “My fellow Americans, it has been the honor of my life to serve you. I won’t stop. In fact, I will be right there with you, as a citizen, for all my remaining days. But for now, whether you are young or whether you’re young at heart, I do have one final ask of you as your President — the same thing I asked when you took a chance on me eight years ago. I’m asking you to believe. Not in my ability to bring about change — but in yours.”

The message follows a longer letter from the President published yesterday: