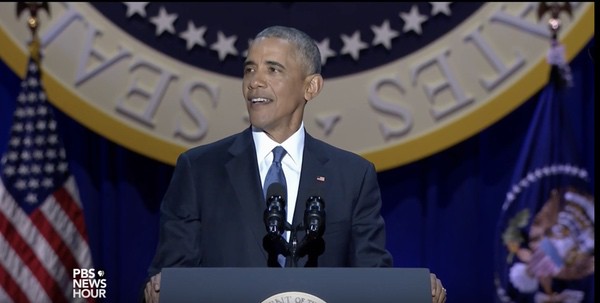 President Obama released a statement through a spokesman praising citizen protest following a weekend of mass demonstrations at US airports over Trump’s Muslim ban.

“President Obama is heartened by the level of engagement taking place in communities around the country. In his final official speech as President, he spoke about the important role of citizen and how all Americans have a responsibility to be the guardians of our democracy – not just during an election but every day.

Citizens exercising their Constitutional right to assemble, organize and have their voices heard by their elected officials is exactly what we expect to see when American values are at stake.

With regard to comparisons to President Obama’s foreign policy decisions, as we’ve heard before, the President fundamentally disagrees with the notion of discriminating against individuals because of their faith or religion.”

JUST IN: Pres. Obama "is heartened by the level of engagement taking place in communities around the country," spokesman says. pic.twitter.com/sbuT5n6z4y

Previous Post: « Many in Taiwan Aim to Make it the First Asian Country with Same-Sex Marriage
Next Post: Sean Spicer Refuses to Discuss Rumored Anti-LGBT Executive Order Coming from Trump This Week: WATCH »