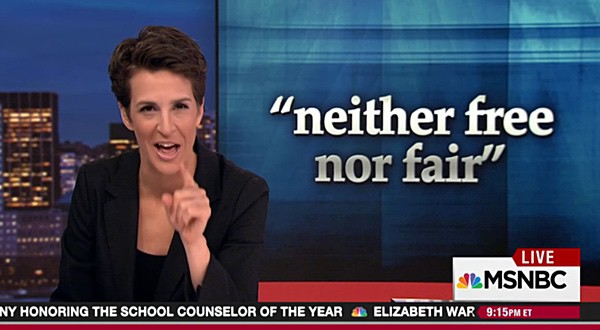 As only she can do (and I’d recommend you watch both segments if you want a quick lesson), Rachel Maddow explained the backstory of the Russian hacking — Vladimir Putin’s rage at Hillary Clinton for calling out the “neither free nor fair” Russian election in 2011 that handed him the presidency.

“This is his payback for that.”

And the report from the Office of the Director of National Intelligence (you can read that too – it’s 5 pages) released yesterday validates that explanation.

“But when this thing came out publicly today,” Maddow added in her next segment, “there was one additional thing that this report taught us. It’s not about Russia. It’s not about Hillary Clinton. It’s not even about our last election. But it’s really important, and it’s about our new president.”

“What we learned today…is that our new president will flat out lie to us. To our faces. And even put it in writing. Even when we can check for ourselves and see for ourselves that he is blatantly lying about a really big thing. He apparently will just bracingly lie to us even about really important national security stuff. And we learned that today if we didn’t believe it before.”

What Donald Trump said about the report was, “There was absolutely no effect on the outcome of the election.”

“He put out a written statement about what he learned in the briefing. And he blatantly, and overtly, bluntly, simply lied about what is in this report. Right before this report got publicly released so we could check ourselves and see that he was lying. I have to say I don’t get weirded out by a lot of stuff in the news but this puts a shiver down my spine.”