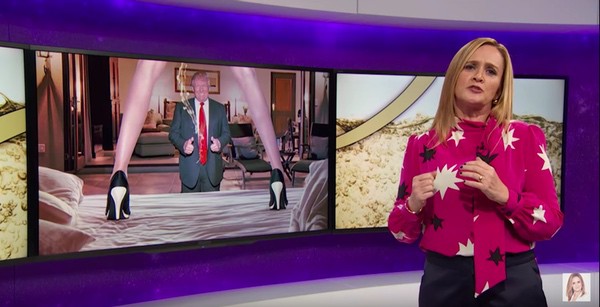 Samantha Bee took on Trump’s golden showers story last night and admitted that “the only verifiable thing about this report is how much joy it gave me.”

“There’s a high probability this story is bullshit,” she adds, “but the fact that it’s plausible bullshit is a terrifying statement about what our nation has come to.”

She’s also finding one thing a bit fishy about the claim that he paid to watch prostitutes pee on each other.

“Oh bulls**t, like we’re supposed to believe that Trump has started paying people who work for him?”

Bee also calls out Brian Williams for “taking a trip to euphemism town” by describing Tuesday night as “one of those moments in American politics…a confluence of events.”

“Just one of those classic moments where the first Black president gives a farewell speech while the next president watches two chicks piss on a bed.”

Bee then went on to take apart Trump’s past obsessions with peeing and bathroom shaming (remember Hillary Clinton’s trip to the bathroom during the debate?) as well as Trump’s circus of a press conference in which he brought out his “dumbass prop table” again.

Bee concludes, “We can only hope the incontinent sex worker frosting draws attention to the report’s less delicious details about Russia manipulating our president. After all, as the old Disney song goes, ‘A spoonful of hooker urine helps the treason claims go down.'”