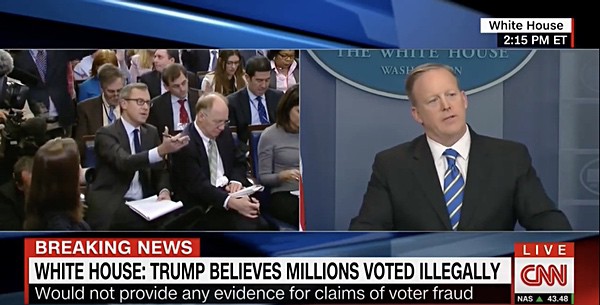 Donald Trump, who lied to congressional leaders that 3-5 million illegal ballots cost him the popular vote in November’s election, is apparently sticking to that false claim, as his Press Secretary Sean Spicer, despite it being widely discredited.

Spicer was grilled about the assertion in today’s press briefing by CNN’s Jeff Zeleny.

“How can he be comfortable with his win, if he believes it was three million votes. Maybe he didn’t win,” asked Zeleny.

“He’s very comfortable with his win,” Spicer replied. “It’s an electoral based system. He got 306 electoral votes. 33 of 50 states voted for him. I’ve asked and answered this question twice. He believes based on the information that has been provided.”

Responded Zeleny: “Have you?”

.@jaketapper: There is a reason White House is providing no evidence about voter fraud claim – there is no evidence. https://t.co/abX6903oZi pic.twitter.com/fi5vkeK7Um