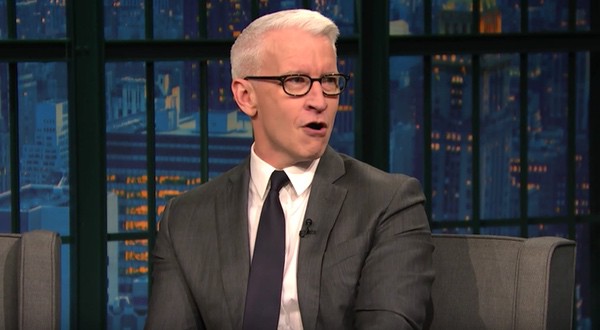 Anderson Cooper sat down with Seth Meyers last night to talk about a number of things, including his mother, Gloria Vanderbilt, who just turned 93, and how she says things that shock him, such as wondering if Andy Cohen is going to ask her who is the most hung guy in Hollywood.

“She has no filter anymore,” said Anderson.

Anderson also enthused about Cher and what a powerhouse she is politically, treating the Late Night audience to an impression of the diva after revealing that she calls him her “little bro.”

Said Meyers: “I think I’m not alone of the people in this room who thought, ‘That’s a better Cher than I thought Anderson would have.'”

Anderson also talked about Donald Trump and how much he watches CNN, while wandering around the White House in his bathrobe.

Previous Post: « After GOP Tells Her to Sit Down and Shut Up, Elizabeth Warren Finishes Her Remarks on Facebook Live: WATCH
Next Post: Tanzania Orders ‘Gay’ Men to Report to Police for Questioning »