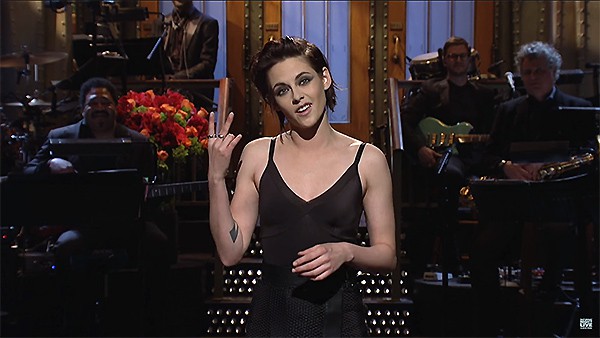 He’s tweeted about her on eleven separate occasions, including once—retweeted nearly 23,000 times—in which he says she cheated  “like a dog,” so actress Kristen Stewart finally responded in kind to Trump.

In her monologue for Saturday Night Live over the weekend, in an episode that would already draw much attention for its celebrated Melissa-McCarthy-as-Sean-Spicer sketch, Stewart pondered the Tweeter-in-Chief’s bygone obsession with her and then defiantly proclaimed her sexual identity:

Four years ago, I was dating this guy named Rob and we broke up and then we got back together and for some reason it made Donald Trump go insane. So, yeah that’s crazy, right? The president is not a huge fan of me, but that is so OK, and Donald, if you didn’t like me then, you’re really probably not going to like me now, ’cause I’m hosting SNL and I’m, like, so gay, dude.

The star of Twilight franchise fame had a high-profile on-again, off-again romance with co-star Robert Pattinson, although she has also dated women, including ex-girlfriend Alicia Cargile. She has previously declined to define her sexuality specifically, despite her openness about her same-sex relationships.

That made her her quip more than just a clever and effective one-liner. By embracing the identifier “gay,” even as a catch-all LGBTQ term, Stewart counted herself as a visible presence among the community, and in matter-of-fact fashion. The anti-Trump context is even more significant considering LBGT activists’ resistance to this administration and the havoc it has already wrought among other marginalized groups.