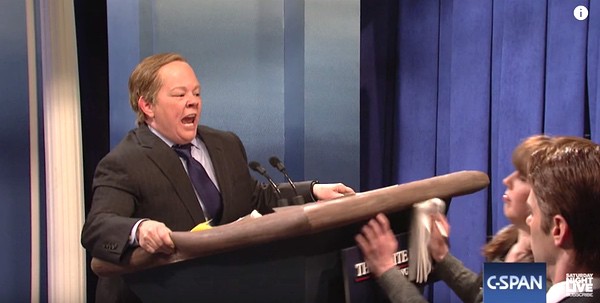 If you missed Melissa McCarthy’s Sean Spicer battling the White House Press Corps. on SNL, it was the winning sketch on Saturday night and a must-see.

I didn't think it was possible for me to love @melissamccarthy more. Yet now I do! Brilliant!!!! pic.twitter.com/x9n826P6Jd

But why was McCarthy the perfect actor for this role?

Anna North breaks it down in the NYT:

Ms. McCarthy isn’t funny as Mr. Spicer because she’s a woman, she’s funny as Mr. Spicer because she’s made a career of playing aggressive characters who are often angry for no reason. As Megan, in “Bridesmaids,” she broke new ground as a tough, crude woman with bizarre ideas and no boundaries who nonetheless finds romantic fulfillment, and in subsequent films like “The Heat,” she’s established herself as a powerful physical comedian whose best weapon is her snarl. On “S.N.L,” as she lifts up her podium to attack the press corps, it’s clear she was born to play the mouthpiece of an administration already defined by outbursts of rage.

And while SNL often puts men in women’s clothes, it’s not so often that it goes the other way:

While her gender isn’t the center of her performance, it matters. There’s a bit of an extra bite in a woman lampooning the spokesperson of a president who once bragged about grabbing women’s genitals, and who was reportedly moved to rage last month when attendance at women’s protests around the world dwarfed attendance at his inauguration. Add to that the fact that President Trump reportedly wants his female staffers to “dress like women,” and Melissa McCarthy dressing like a man to play his press secretary feels like a particularly astute way to needle the White House.

Melissa McCarthy’s turn as Sean Spicer is a reminder that cross-gender casting can be a lot more interesting than just putting a man in a dress — and that when you’re trying to mock an administration that seems almost unmockable in its absurdity, it helps to pick the best woman for the job.

And this is how we’re feeling too.