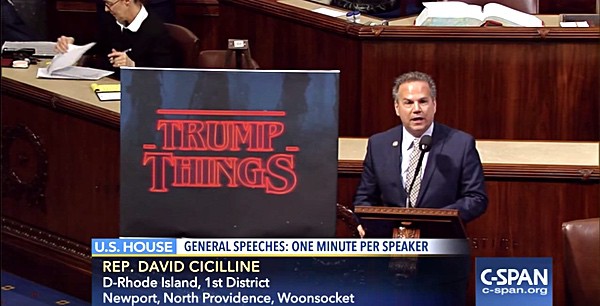 Rep. David Cicilline (D-RI) used metaphors from the hit Netflix series Stranger Things to make a point about the dire things Trump is doing to the United States. Representatives were given one minute to speak, so, to make a harder-hitting point, Cicilline even brought along visuals: a graphic resembling the show’s logo.

“Mr. Speaker, like the main characters in Stranger Things, we are now stuck in the Upside Down. Right is wrong, up is down, black is white,” said Cicilline.

He then launched into a list of all the things that are not as they should be.

“The White House deceives the American public for weeks about their contacts with Russia but an Attorney General who follows her conscience is fired. Executive orders are signed to ban Muslims to keep us safe while national security conversations are held out in the open. President Trump showers praise on a thug like Vladimir Putin while threatening and bullying our longstanding allies. President Trump signs an executive order to spend 20 billion dollars on a border wall while Flint, Michigan still goes without clean drinking water.”

And he issued a warning that we must be vigilant and get out of this mess.

“Mr. Speaker, mornings might be for coffee and contemplation, but Chief Jim Hopper is not coming to rescue us. This is not a TV show. This is real life. And we have a President unlike and we have ever known. And like Mike, Lucas, Dustin, and Eleven, we must remain focused on the task at hand and hold this administration accountable so we can escape from our own version of the Upside Down.”