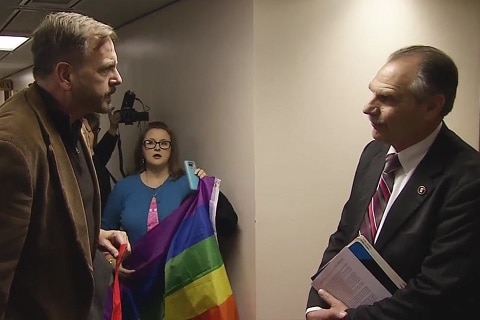 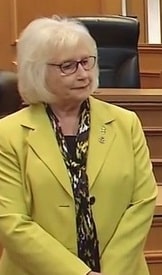 Two Republican lawmakers were booed out of a Tennessee press conference this week after they filed a bill against same-sex marriage.

The bill argues that Tennessee doesn’t have to follow the Supreme Court’s ruling on same-sex marriage.

Fox17 reports that Senator Mae Beavers (right) and Representative Mark Pody (above right) managed to speak for less than two minutes before being confronted by the angry audience.

When confronted by an actual, real, live homosexual (above left), Pody is seen to be utterly flummoxed.

Senator Mae Beavers and Represent Pody walked out of the conference in less than 3 minutes w/o listening to any protesters! Cowards!

So many opponents started disrupting the press conference both lawmakers ended it early only to be chased down the hall by those demonstrators.

“Some kind of Christian you are you won’t allow someone else to have equal rights under God with you,” one demonstrator said.

Among the people in the crowd were Ann and Darlene Jacobs-Anderson.

The same-sex couple told Fox 17 news they should not have to fight for their marriage that came after the Supreme Court decision..

Sen. Beavers said the bathroom bill is needed to protect students at school. She also said the marriage bill is necessary to protect the Tennessee Constitution that prohibits gay marriage.

“I don’t feel like this is something the Supreme Court should’ve even take up, and I believe in State sovereignty and I believe in the ability of Tennessee to write their own Constitution,” Beavers said.

Protesters then chased Beavers and Pody to their offices.

Beavers and Pody have also sponsored a bill that would require transgender students to use the restrooms of their birth sex.