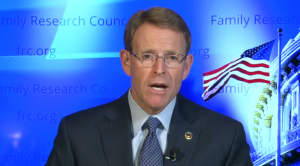 Tony Perkins remains bullish that the Trump administration will still target the LGBT community with a forthcoming executive order.

The leader of the Family Research Council, designated by the Southern Poverty Law Center as a hate group, spoke with Fox News following Trump’s address today at the National Prayer Breakfast, in which he vowed to lift the Johnson amendment that prevents the endorsement of political candidates by tax-exempt religious organizations. On the subject of the draft executive order on “religious freedom” that has been circulating, Perkins declared himself “optimistic that this administration is going to address that.” He had previously expressed similar confidence on the matter even though the administration claims it has no plans to sign it.

The EO is entitled “Establishing a Government-Wide Initiative to Respect Religious Freedom,” and would allow so-called exemptions from federal law for groups and individuals who maintain religious objections to same-sex marriage, trans identity, and a raft of other similar issues.

When confronted with the apropos words of Sarah Kate Ellis, the GLAAD president, that this EO “would be a national license to discriminate, and it would endanger LGBTQ people and their families,” Perkins ignored the point entirely.

Referring to sexual and gender identity as “doing anything you want and making everybody embrace it,” he claimed that the free market would provide a failsafe. It is the same sort of argument that justified Jim Crow laws in the South and does not acknowledge that this purported “free” market itself would be sectioned off from entire segments of the population.