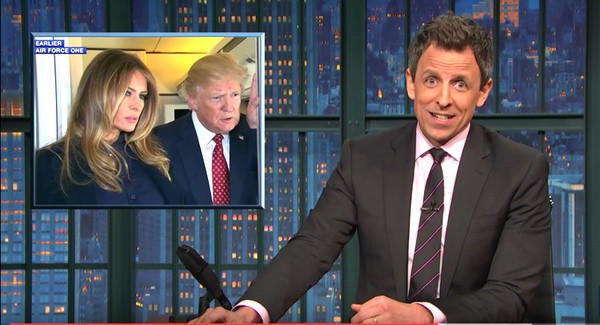 Seth Meyers took a look at Michael Flynn’s run as National Security Advisor and the turmoil the Trump administration has found itself in trying to explain what’s going on.

Of Flynn’s 24-day tenure tenure, Meyers quipped: “I use disposable razors longer than this.”

And Trump aide Stephen Miller had a reckless morning on Sunday hitting the morning shows with his creepy presence:

“Stephen Miller looks like the guy who shows up with a flashlight when teens are getting drunk in a graveyard.”

Kellyanne Conway was proven to be out of the loop when she proclaimed that Flynn had the “full confidence” of the president.

And Trump himself pretended not to know what the Flynn reports were about. Not credible:

“Trump sounds like a guy who’s being told there’s a nude scene in a movie he’s definitely already watched.”