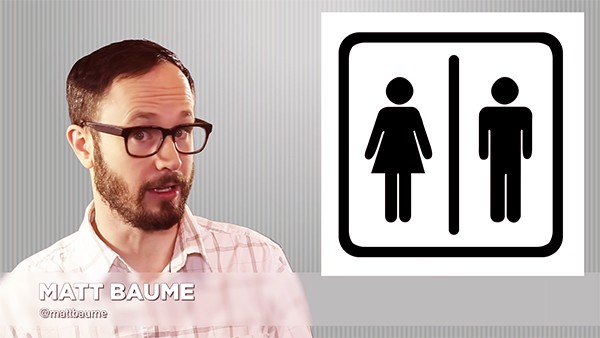 North Carolina’s HB2 is the most infamous example, while Texas seems to be the next high-stakes battle, among various other instances. What’s leading to all this? Baume puts forth his theory:

Lawmakers claim that their bills will stop predators, and protect children.

They’re devoting a lot of thought to seats ― but not toilet seats, legislative seats. These discriminatory bills don’t protect citizens; they protect politicians. Here’s how:

In 2016, there were around fifty bills introduced in various states that discriminated against trans people ― not just in bathrooms, but in housing, education, employment, and more. And when you look at who introduced those bills, a funny pattern starts to appear.

Baume finds that roughly 3 out of 4 sponsors for these bills are running for re-election when they do so, and nearly all—96%—successfully won after doing so. Furthermore, he draws a line between this tactic and the 2004 fixation on banning same-sex marriage, which, just like 2016, happened to be a presidential election year as well. That year, 11 different states went so far as to put an anti-marriage equality measure on the ballot. Creating a moral panic and convincing constituents that a problem exists lets legislators play the role of concerned defenders of the public and their children when instead textbook demagoguery is at play.

Baume points out the inherent contradiction in these misplaced priorities:

In fact, if anyone’s in danger, it’s trans people themselves. A Williams Institute study showed that 70% have been been harassed or attacked when trying to use a bathroom. So if politicians really cared about safety, they’d make bathrooms more inclusive, not less.