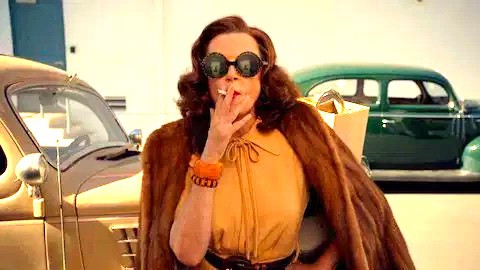 It’s hard to say coming out of episode two of Feud: Bette and Joan what exactly we’re supposed to be feeling. For a show with so much to say (and say and say and say) about how Hollywood and society pits two women against each other, it is strange to place the entire message within a series designed to delight in every nasty comment and bitchy moment.

The second installment (“The Other Woman”) doesn’t pack the same wallop as the premiere, and a lot of that has to do with the shifting power dynamics. Feud is at its best when it focuses on titans Bette and Joan using their wit, grit and animosity toward one another to wage a deeply personal war that says more about artistry versus celebrity than it does women’s lib. Where it starts to lose its zing is when it plays out the societal forces working against the women of the time. It’s not that those elements didn’t heavily influence this story, it’s just Ryan Murphy comments about women in Hollywood with all the nuance of a Bernie bro tweeting about International Women’s Day.

The persistent proselytizing makes these powerful women pawns, which surely was true to an extent, but it seems endlessly at odds with the glee with which we’re supposed to devour their devilish behavior.

“The writing doesn’t begin to capture the way women get under each other’s skin,” we heard Joan critiquing Aldrich’s Baby Jane script in last night’s episode. When it comes to the ways women wage war against one another, it seems Feud wants to relish in the how, but can’t quite nail the why.

Which brings us to “The Other Woman,” an episode that folds in so many real and imagined threats between its women, it’s basically a phyllo dough of “Bad Blood.” (Sorry, I’ve been watching a lot of The Great British Baking Show.)

Let’s put on our best feathered hats and recount what went down in last night’s episode. 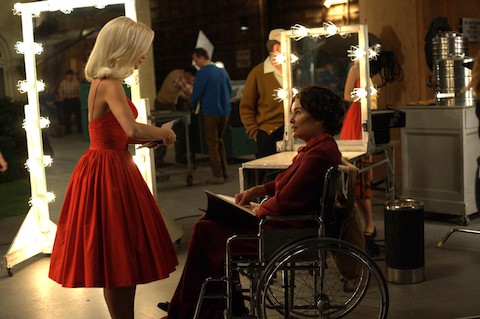 There’s a new actress on set, and she’s that “sexy neighbor girl” alluded to in the premiere. In case the jealousy wasn’t already palpable, she introduces herself to Joan with “Miss Crawford, can I please have your autograph? It’s for my grandmother — she’s loved you since she was a kid!”

Resisting the urge to slap her on the spot for that read, Joan sidles up to director Bob Aldrich and demands she gets fired. For now, Bob likes to think this isn’t a Feudocracy, it’s a Feudtatorship, and he’s not bowing to Crawford just yet. So, she enlists the aid of her co-star, Bette, baiting her with the threat that once Aldrich sleeps with the young ingenue, she’ll suddenly start stealing more and more scenes. That’s enough to get Bette to threaten to walk off set. Bob can’t say no to their united front, and the neighbor girl is shown the door.

Of course, this show isn’t called RuPaul’s Best Friend Race: Bette and Joan (though we would totally watch that). So, after promising to release the film to more theaters, Jack Warner convinces Bob to stoke the rivalry between his leading ladies so the film maintains its buzz.

If anyone knows about feeding the fury between Bette and Joan, it’s Warner. He signed Crawford on at a deep discount and used her to try to control Bette back in the day. He offered Joan all of Bette’s scraps, including the Oscar-winning role in Mildred Pierce, sewing the seeds of the rivalry we’re seeing playing out now.

Bob shares his discomfort with this whole situation to his wife, Harriet. She’s heard her own fair share of gossip about Bob’s “other woman” (get it? GET IT?!), and, even though he says it’s all bullshit, she reminds him “It hurts just the same, and you should consider that before you spread gossip of your own.”

Unfortunately, Bob’s between a rock and a hard place. Not unlike the hard place on Joan’s chest, which he describes to gossip columnist Hedda Hopper in great detail, telling her Davis is annoyed with Joan’s falsies. He even tells her Bette is worried about falling on them in the beach scene and chipping a tooth.

When Joan reads this in Hedda’s column, she’s obviously furious. Despite Bette’s denial that she spoke ill to Hedda, Crawford still phones a rival columnist to talk smack about Bette on the record. Their temporary truce is officially over, and there might not be much of Hollywood left standing once they’re through.

The mudslinging in the papers is only one part of the equation. Bob also needs to further their resentment by making them jealous of the other’s relationship with him. He meets Bette on a Saturday to work on the iconic “I’m Writing A Letter To Daddy” performance. We see a softer side of Davis here, unsure if her bold take on Baby Jane is brilliantly twisted or a misguided joke. Aldrich assures her what she’s doing is Oscar worthy, and the two share an intimate moment choreographing the scene.

Even without TMZ and social media, word still travels fast about their little rendezvous, and it’s enough for Joan to feel mighty threatened. She phones Aldrich in the middle of the night, cooking up a story about her lover, Peter, leaving her because she’s too focused on the film. He rushes over, and she attempts to sleep with him (like they did on their last film together). He’s not having it. He tells her he’s not sleeping with Davis, and her whole charade comes crashing down when Peter returns unexpectedly. He didn’t leave her; he was heading out of town but a road got washed out. Aldrich excuses himself from this drama, leaving a furious Crawford to send Peter packing for real. 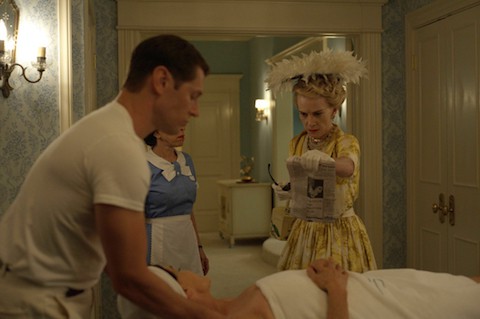 She won’t be lonely for long, because Hedda arrives the next day, and she’s irate that Joan ran to a rival columnist with her Davis dirt. It seems Hedda played a heavy hand in getting Joan back on the map when her career was faltering. Joan masterfully redirects her rage, playing to Hedda’s heart. She confesses that she’s broke, and she needs Hedda’s help to make sure this picture earns her an Oscar (and another few years of work).

As Joan secures a powerful ally, Bette is having a harder time coping. Besides being a little unsure of herself when it comes to her character, she’s also feeling adrift as an aging actress. First, she meets her love interest for the film, and he’s not the dashing leading man she may have hoped for. (She’s paired with heavyset homosexual, Victor Buono. He becomes much more important in future episodes.) What really sends her over the edge though is seeing her daughter B.D. flirt with all the boys in the crew.

When mother and daughter get home, B.D. lays into Bette with the kind of blunt-force dialogue that could spoil a whole scene if Sarandon didn’t sell the punches so well. B.D. viciously rips into her mother about not aging gracefully or accepting that her time to shine was over, not just as an actress, but as a woman.

The exchange leaves Davis seriously shook. It leads to yet another late-night call to Aldrich, and the director speeds over. He assures her she’s doing excellent work, and the two share a really tender evening openly discussing their fears and insecurities. Yes, it ends in sex, but it’s not manipulative, like Joan would do. It feels sincere.

That doesn’t make it any easier to swallow when Aldrich creeps into bed just before his alarm goes off to start another day. His wife stares blankly ahead with her back turned to him, likely imagining which other woman will come calling next.

“Forget the little daily gifts, Lucille, I’m going to be much too busy working to shop for anything in return.” — Bette Davis

“Don’t fool yourself, even you’re not man enough to satisfy two women.”  — Harriet to Bob Aldrich

“There’s so much ham up there I’m going to have to go my rabbi this afternoon and atone.”  — Jack Warner watching Baby Jane dailies.

“Ms. Davis looks old enough to be my mother. One look at her face and you’d think she hasn’t had a happy day or night in her life.” — Joan Crawford on-the-record with the gossip rags.

“You don’t like it because you can’t wear one anymore.” — B.D. theorizing why Bette can’t stand the song “Itsy Bitsy Teenie Weenie Yellow Polkadot Bikini.”

Round 2 goes to: Joan Crawford, again. She played Aldrich, she played Davis, she played Hedda. Bette is no slouch, but I’m not sure she realizes the extent of Joan’s cunning just yet. Ms. Crawford may be winning these manipulative battles, but Davis’ tenacity and talent could be enough to win the war.

What did you think of last night’s episode of Feud?

Previous Post: « Kellyanne Conway Suggests Trump Might Have Been Spied on Through His Microwave Oven: WATCH
Next Post: Gay Students at Oregon High School Received Death Threat in Gender-Neutral Bathroom »