Empire actor Jussie Smollett debuted “F.U.W.” (short for “f**ked up world), a new track accompanied by a searing anti-Trump video (directed by Smollett) that captures how many are feeling under this new regime. 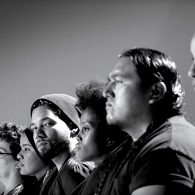 The black-and-white video features men and woman of various ethnicities and highlights injustices, from human and LGBT rights to religious and racial prejudices. A woman wears a hijab in one scene, a boy wears a hoodie in another and four women put their fists up as they stand in front of the words, “My body, my rights.”

“This song is for the oppressed. That’s why I feel like people will connect with it because it is very broad, because oppression is so broad,” he said in an interview Tuesday with The Associated Press.

In another scene, a man in a wheelchair runs over a Donald Trump mask.

“It’s our opportunity to take those masks off and shatter them, so that’s what I did,” he added.

Previous Post: « Go Beyond the Neon and See a Side of Las Vegas You Never Knew Existed
Next Post: ‘RuPaul’s Drag Race’ Reveals This Season’s Judges: WATCH »