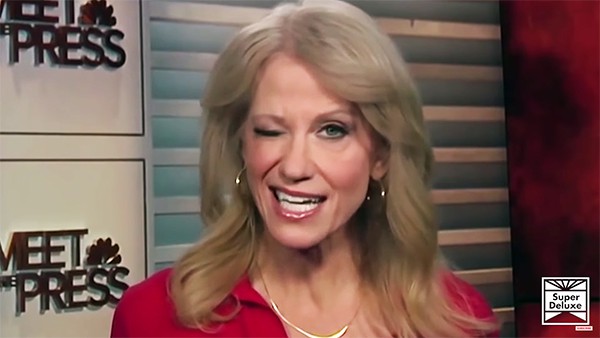 Courtesy of satirist video editor Vic Berger and Super Deluxe, we now have the playbook on Kellyanne Conway’s dodges, go-to cliches, and facial tics, if you have the stomach to watch. Berger spent the 2016 election putting out a series of viral videos, and now Conway gets her own special treatment.

Having achieved national prominence then as Trump’s campaign manager, with a series of media appearances in which she took a pass on every difficult question with “you’ll have to ask him that,” to the point where one wondered whether she’d ever spoken with her candidate, Conway then took on the role of White House counselor and frequent spokesperson with more of the same.

Most infamously, on the same day in which former National Security Adviser Michael Flynn later resigned in disgrace, Conway hit the television circuit telling anybody who would listen that he enjoyed the “full confidence of the president” and replying to any follow-up questions with “his statement speaks for itself.” (This left anybody watching to wonder why she’d bothered to appear at all.)

It seemed all she had to offer appeared to be forced smiles and jokey throwaway lines that she only she felt were “gotcha” moments that were actually equal parts infuriating and laughable. (No, pointing this out isn’t in and of itself “sexist” despite misguided attempts at false equivalence.) Now you can watch her particular blend of evasiveness and smarminess in all its (vain)glory: