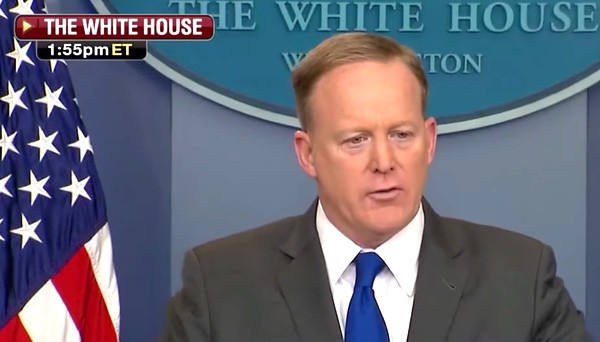 Sean Spicer made the astonishing claim today that former Trump Campaign Manager Paul Manafort had a “limited role” in the Trump campaign.

Said Spicer while being grilled about the FBI investigation intro the Trump campaign’s contacts with Russia:

“There is a point at which you continue to search for something that everybody has been briefed has not seen or found. I think it is fine to look into it but at the end of the day, they’re going to come to the same conclusion everybody else has had. I heard some names floated around before, that were hangers-on around the campaign. I think at some point, people that got thrown around at the beginning of this hearing, some of those names, the greatest amount of interaction they have had was a cease and desist letters sent to them. The greatest interaction they had with the campaign was the campaign sending them a series of cease and desist letters.”

Spicer then characterized Manafort, who ran Trump’s campaign for five full months, as one of those hangers-on:

“I think that when you read a lot of this activity about associates, there is a fine line between people who want to be part of something that they never had an official role and in people who actually played a role in the campaign or transition. Obviously there has been some discussion of Paul Manafort, who played a very limited role for a very limited amount of time.”

Manafort released a statement after today’s hearing, saying, “the suggestion that I ever worked in concert with anyone to release hacked emails or sought to undermine the interests of the United States is false.”