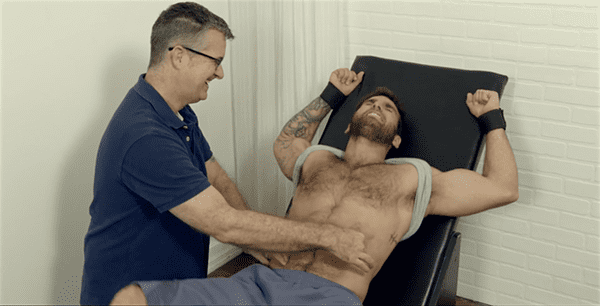 The filmmakers of the HBO documentary Tickled responded over the weekend to the abrupt death of the movie’s main subject, elusive producer-fetishist David D’Amato.

D’Amato gained notoriety as the elusive subject of Farrier and Reeve’s investigation into and the subsequent documentary on Jane O’Brien Media, a company that produces “competitive tickling” fetish videos featuring young, athletic male participants. The duo alleges that D’Amato ran and funded the company, which allegedly intimidated the subjects of the videos if they did not comply with specific demands. D’Amato denied that he was affiliated with the company, but a slew of documents revealed during the investigations appear to tie him directly to the business.

The Tickled filmmakers released a statement:

We are incredibly sad to learn that David P D’Amato, the subject of Tickled, has passed away. We don’t know any specific details about his death at this time.

David D’Amato has been a part of our lives for around three years now – a very unusual three years – and despite the various lawsuits he brought against us, this news is something that brings us no joy, and has hit us pretty hard.

We mostly knew David through talking to those he had interacted with online over the last 20 years, and people that he had been close to.

We only met him twice; Once in Garden City, and another time when he turned up to a screening of the documentary in

Los Angeles. We met a man who came out swinging, so to speak – threatening more lawsuits, while at the same time commenting that he enjoyed certain elements of the film. It seems to us that underneath it all, he did have a certain sense of humor.

It is also clear that he had certain troubles, and those are troubles that we hoped he would come to terms with at some point.

While making Tickled we always thought it was important to portray David D’Amato not just as an online bully, but as a person. That is why the closing minutes of Tickled are so important to us – an insight into D’Amato, the person. Ultimately we’ll never know all the things that made David the man he was. Like all of us, he was complex and complicated.

So we ask you to keep in mind that while David appears to have lived a fairly solitary life, he did have friends and family members. We ask that in comments online, and out there in the real world, you treat this information, and this man’s passing, with respect.

Towleroad’s Bobby Hankinson spoke with Farrier about the film earlier this year. Read that interview HERE.

Watch D’Amato confront the filmmakers at the film’s premiere:

Top image: A scene from Tickled.