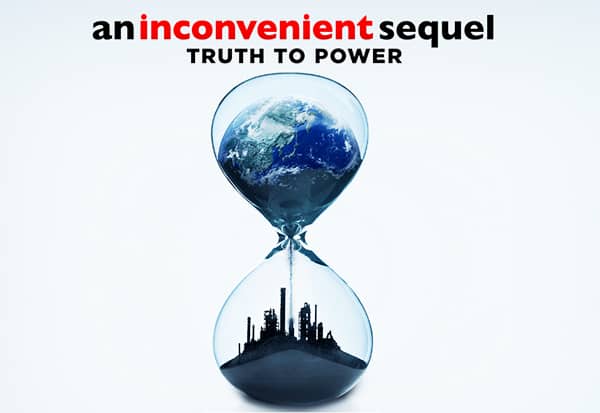 The powerful trailer for a sequel to the standout 2006 climate-change documentary An Inconvenient Truth, entitled An Inconvenient Sequel: Truth to Power, arrived this week, and unsurprisingly, it highlights the Trump administration as an obstacle to climate action.

It opens with a clip of Trump’s particular brand of “humor” at a rally, where he blurts out, “Where is—we need global warming!” due to the cold weather that day, turning possibly the gravest crisis of our time into a throwaway joke, and not a very original one at that. Of course, he has also expressed the curious view that climate change is a hoax perpetrated by the Chinese, and this week rolled back as many climate protections his predecessor enacted as he could find.

The first film took in $24 million at the box office and won two Academy Awards, while former Vice President Al Gore, who starred and narrated, won a Nobel Peace Prize the following year for his activism. It was credited by the New York Times for changing public perceptions about climate change, based on a surge in polling respondents who say they accept that climate change is a problem that needs to be addressed.

The old framing of whether climate change “exists” or the more recent popular dodge among deniers, whether it is “human-caused,” is a peculiar one given the overwhelming consensus among climate scientists that increasing global temperatures are largely due to carbon emissions, not to mention the ever-growing evidence of disappearing ice caps. Turning it into a metaphysical question, like whether one believes in astrology, trivializes the problem and makes it sound more controversial or debated than it actually is by experts who are in a position to know.

While this is clearly the goal of fossil fuel lobbyists who busily sow the seeds of doubt, possibly more than any other issue, climate change is a victim of the hyper-partisanship that has taken over our body politic. Acknowledging or expressing concern about climate change depends on which “team” one is on, when instead, ideally the politics should be about deciding among possible solutions and remedies or even simple coping strategies to take in the face of its advance. Opinions differ on those even among climate change activists, after all.

In the trailer, Gore cites progress that has been made but urges there is still much more to do. Even though the Obama administration directed the Environmental Protection Agency to regulate carbon emissions, that move was blocked by the Supreme Court, and it was instrumental in pushing forward the landmark Paris Agreement among 195 nations on climate, a legislative window was squandered when Democrats controlled both chambers of Congress for its first two years, although then-Speaker Nancy Pelosi did pass an emissions-trading scheme.

Republicans have since controlled the House of Representatives and now the White House, with a climate change-denier now running the EPA and Trump threatening to withdraw from the Paris Agreement.

The film seems likely to explore this frustrating history and spark a new call to action to combat climate change, such as the People’s Climate March on Washington scheduled for April 29. Watch the trailer below: