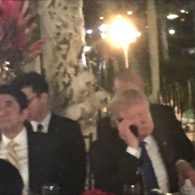 CELLPHONE DIPLOMACY. Trump is handing out his number to world leaders, at the peril of the U.S.: “Presidents generally place calls on one of several secure phone lines, including those in the White House Situation Room, the Oval Office or the presidential limousine. Even if Trump uses his government-issued cellphone, his calls are vulnerable to eavesdropping, particularly from foreign governments, national security experts say.”

RIP. Pulse nightclub shooting survivor killed in Florida car crash. “Jahqui Sevilla, a football player with the Orlando Anarchy female team, was killed after she lost control of her Mitsubishi Lancer, went over a median and slammed head-on to another car.”

LAPTOP BAN. The greater danger for a ban? More lithium batteries in the hold: “According to Mo, who specializes in thermal management systems for batteries, it’s better for the batteries to be in the cabin as opposed to the cargo hold. ‘So when (a fire) happens, it’s better to have humans nearby to react and put out the fire,’ Mo added. This is exactly what seems to have happened on board Flight 915.”

HE’S EVERY WOMAN. Andrew Garfield lip syncs for his life.

UNAPOLOGETIC BIKERS. South Africa’s first gay bikers club. “The main point is to reach out to the community and help people who struggle and to show we care. Ultimately, I want to help prove wrong all the stereotypes that people have about being gay.”

CHICAGO. Service of LGBT veterans honored in new monument: “The first LGBT veterans monument in the city, and among the first in the U.S., was unveiled on Memorial Day at the corner of Halsted and Addison streets, in front of the new Town Hall senior LGBTQ friendly apartments—and where the old Town Hall police station was located.”

CHRIS HEMSWORTH. He can even make a chef’s uniform sexy.

BABY BIRD. Gay vulture dads hatch a chick at Amsterdam zoo: “The zoo said the vultures, which have been a couple for years, took turns sitting on the egg until it hatched. Now, the new dads are taking care of the chick by feeding it regurgitated food.”