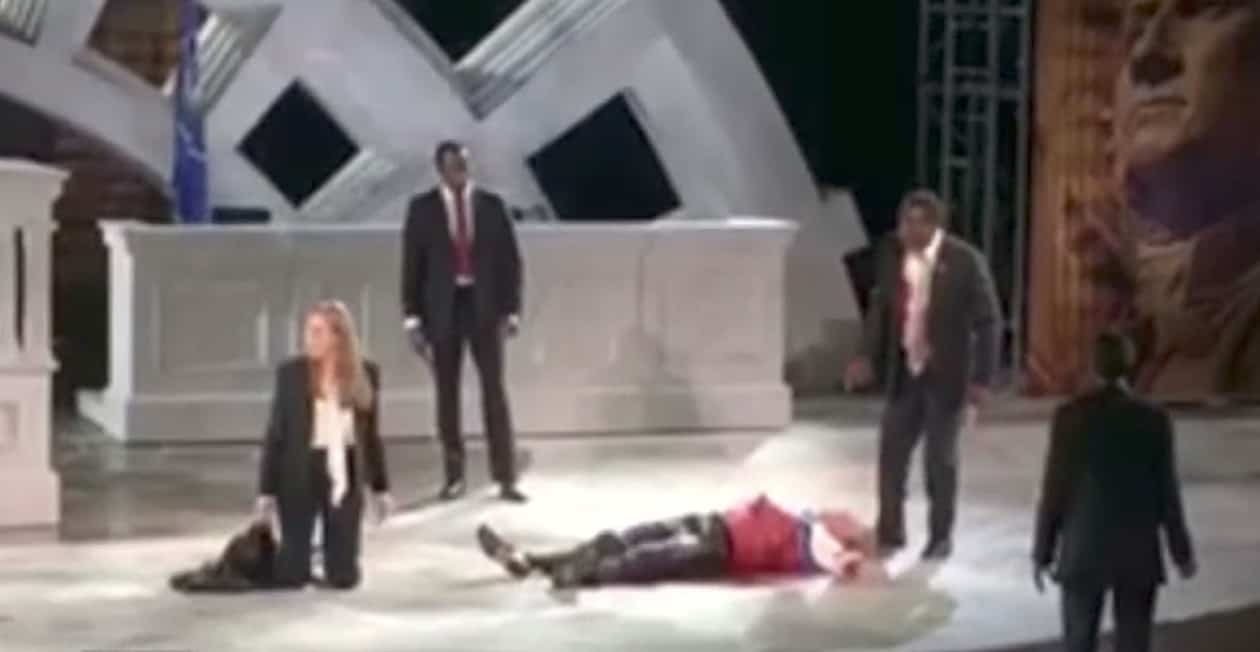 Delta and Bank of America have dropped sponsorship of a Public Theatre production of Julius Caesar which features a very Trump-like Caesar.

Said Delta in a statement:

“No matter what your political stance may be, the graphic staging of ‘Julius Caesar’ at this summer’s Free Shakespeare in the Park does not reflect Delta Air Lines’ values. Their artistic and creative direction crossed the line on the standards of good taste. We have notified them of our decision to end our sponsorship as the official airline of the Public Theater effective immediately.”

Said B of A: “Bank of America supports arts programs worldwide, including an 11-year partnership with the Public Theater and Shakespeare in the Park. The Public Theater chose to present Julius Caesar in such a way that was intended to provoke and offend. Had this intention been made known to us, we would have decided not to sponsor it. We are withdrawing our funding for this production.”

We are withdrawing our funding pic.twitter.com/MlaONF82FN

No matter what your political stance may be, the graphic staging of Julius Caesar at this summer's Free Shakespeare in… 1/4

The controversy surrounding the production started when conservatives, including Fox News’ Fox & Friends, began condemning the show on account of its Trumpian similarities. “A New York City play appears to depict President Trump being brutally stabbed to death by women and minorities, Fox & Friends reported,” read an article on the Fox News website. The post doesn’t mention the play is Julius Caesar, which was first performed in 1599 and has always featured Caesar’s death. Trump is not referenced at all in the staging of the production; the doomed lead character is referred to as Caesar.

I wonder how much of this "art" is funded by taxpayers? Serious question, when does "art" become political speech & does that change things? https://t.co/JfOmLLBJCn

Watch an Inside Edition report on the production: