You are here: Home / Steve Bannon Fed Trump Fake Climate Change Facts to Convince Him to Pull Out of Paris Pact: REPORT 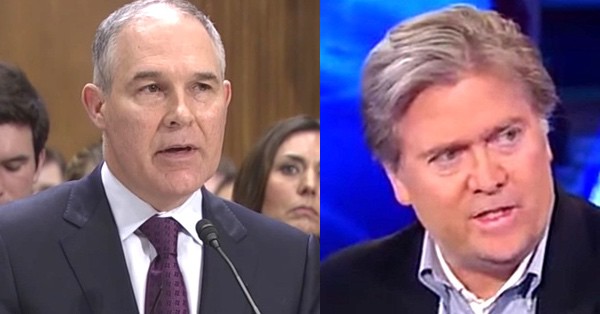 Steve Bannon and Scott Pruitt gave Trump “erroneous, scientifically dubious, misleading or out of date” information to convince him to pull out of the Paris climate accord, say White House officials who spoke to the Washington Post and were opposed to the withdrawal:

During meetings with the president, Bannon, Pruitt and their allies came armed with reams of documents filled with numbers and statistics showing what they said would be the negative effects on the U.S. economy if the United States remained in the climate deal. They were, in the words of one Republican in frequent contact with the White House, “ready to go to trial.”

“They were presenting facts and figures,” [Kellyanne] Conway said. “They were really important. That was the evidentiary case.”

Some of those opposed to pulling out of the pact, however, said that much of the data the other side presented was either erroneous, scientifically dubious, misleading or out of date.

The Paris pact was a particular passion for Bannon, who spent the past two weeks consumed by the climate deal, including working feverishly from the West Wing after returning early from Trump’s foreign trip, according to two White House officials familiar with the discussions.